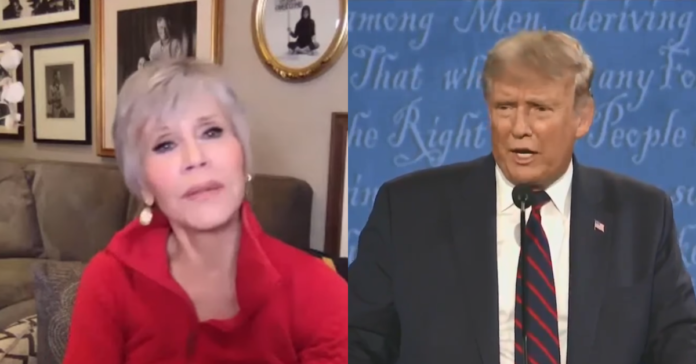 Jane Fonda went full Hanoi Jane in a new video where she said the virus was God’s gift to the left suggesting that this is a political winner, not a national tragedy.

“We can stop fascism. We are at a point where we can — this is a crossroads. It’s an existential crossroads. And we are people who can help determine which way humanity goes,” she started.

“I just think COVID is God’s gift to the left,” Fonda said while she smirked for the camera.

“That’s a terrible thing to say. I think it was a very difficult thing to send down to us, but it has ripped the Band-Aid off who Trump is and what he stands for and what is being done to average people and working people in this country,” she added.

“We can see it now, people who couldn’t see it before, you know, they see it now and we have a chance to harness that anger,” she said.

“We are people who can help determine which way humanity goes. What a great gift, what a tremendous opportunity, we’re just so lucky, we just have to use it with every ounce of intelligence and courage and wherewithal we have,” Fonda said.

Is saying a pandemic that killed over 200,000 Americans and crashed an economy a gift worse than what she did to earn her nickname Hanoi Jane?

Fonda also said,  “We can see it now, people who couldn’t see it before, they see it now, and we have a chance to harness that anger and make a difference. So I feel so blessed to be alive right now.”

Joe Biden has not commented on this as of yet but he has put his negative ads back on the air.

Democratic presidential nominee Joe Biden’s campaign plans to resume running negative digital and television advertisements against President Trump as he recovers from COVID-19, a person familiar with the plans confirmed to The Hill on Wednesday.

The move, first reported by Bloomberg in the late afternoon Wednesday, comes after the Biden campaign decided to take down all negative advertisements Friday following news of the president’s and first lady Melania Trump’s coronavirus diagnosis.

Two sources close to the campaign told The Hill on Friday that the former vice president’s team was taking down the negative ads and had made the decision before the White House announced that Trump was being taken to Walter Reed Medical Center.

In a Friday tweet, Biden wrote, “This cannot be a partisan moment. It must be an American moment. We have to come together as a nation.”