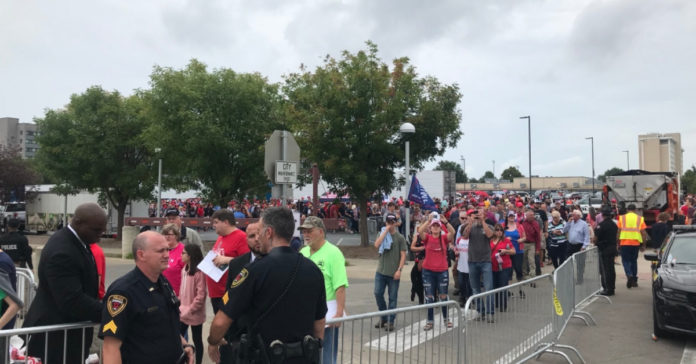 The line started to form at 5:30 am and eventually snaked around for over 2 miles. Imagine a Democrat pulling that kind of crowd for a political rally?

Wouldn’t happen, but it does every time Trump goes to speak. But last night’s raucous crowd even stunned Trump after he saw the number who were turned away because there was no room left.

As reported by Breitbart: Missouri Attorney General Josh Hawley said about 20,000 supporters of President Donald Trump were unable to attend his political rally because the crowd was so big.

“Do you know we had to turn away about 20,000 people or something who could not get into the stadium to be here tonight and see this man,” Hawley said during the rally with Trump. “It’s unbelievable.”

Hawley recalled that Trump told him to host a political rally at the biggest stadium possible and he would fill it.

“I have to confess. I let him down a little bit,” he said.

A local news reporter noted on Twitter that the line for the rally was two miles long and that the first people in the line had been there since 2:00 a.m.

“Have you noticed something about our president?” Hawley asked. “When he makes a promise, he keeps it.”

Trump said that the campaign put “big beautiful screens” outside for the people who could not make it into the rally.

“To all of the people outside, you’re not as good in real estate as the people inside but but we will get you next time,” he said. “We love you anyway.”

Police tell me the JQH Arena May get to capacity. 11,000-plus expected at Trump/Hawley event in Springfield.
First people in line at 5:30am. Line is 2 miles long.@FOX2now @fox4kc pic.twitter.com/XXEimOu5JI