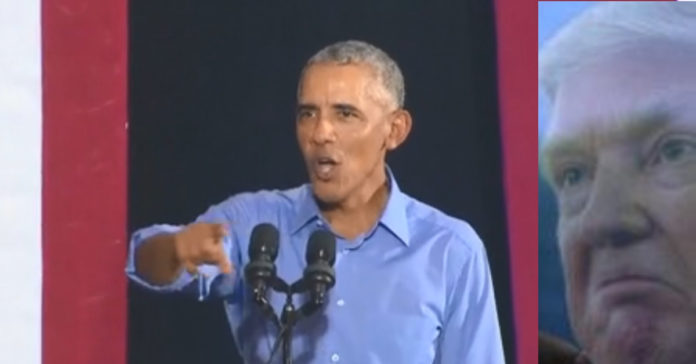 The circus, and by circus I mean Barack Obama hitting the campaign trail, is back in a town near you.

He filled a 3,000 seat venue last night in Ohio – Trump regularly fills venues twice that size which should tell you something – and again went after President Trump.

The left is trying to rewrite history and paint Trump as a monster when in reality they are just as guilty of stretching executive power to its limit.

Bush greatly expanded the power of the presidency to fight his stupid wars and Obama ruled by fiat when he lost Congress.

But it’s all Trump’s fault…

As reported by NBC:

At a packed campaign rally on behalf of Richard Cordray, Ohio’s Democratic candidate for governor, Obama implored supporters to vote in the midterm elections on November 6. “You’ve got to vote, that’s why I’m here” he said, leading the crowd in a chant of “Vote, vote, vote.”

Obama never mentioned Trump directly by name, other than a passing reference to “the person in the White House.” But the message was unmistakable.

“None of this is normal,” Obama said.

Obama said that during his presidency he “was confident the American people wanted to hear the truth” — a pointed jab at Trump, whose penchant for hyperbole and fact-free assertions has been a persistent feature of his personality.

Obama said of Trump and the GOP:

‘At a time when there’s a lot of change going on, demographic shifts and technological changes, and there’s rising inequality, and people’s lives have been disrupted, and they start worrying about whether their lives will be passed on to their children.

‘The biggest threat to our democracy is cynicism. There needs to be a restoration of honesty and decency and lawfulness in our government.

‘People are stressed they are angry, all the chatter and anger on television doesn’t match up to their lives and it breaks our civic trust and it makes people think the game’s rigged and nobody’s looking out for them and historically those kind of divisions, that’s ripe for opportunists trying to exploit America’s history of division – racial, ethnic, religious.

‘Politicians try to keep us angry, and they appeal to our tribal instincts and appeal to fear and they try to pit one against the other and they tell us ‘we need security from those folks who don’t look like us or prey like us’.

‘That is an old play book, it’s as old as time, and as it gets closer to election day you can rely on more and more politicians to pull out that play book.

‘And here’s the thing, in a healthy democracy that play book doesn’t work, if there’s a democracy where everyone is participating and paying attention and listening and voting, people of both parties call out the fear mongers and then they work to compromise and to get things done.

‘But when there’s a vacuum in our democracy, when we don’t vote, when we take our basic rights for granted other voices fill the void and demagogues who promise simple fixes to complicated problems.

‘Some things are complicated, when I was president I was confident the American people wanted the truth – wanted to know what was what.

‘They’ll promise to fight for the little guy when they’re pandering to the most wealthy and powerful and they’ll say they are fighting corruption and they start undermining those institutions that are most essential to our democracy.

‘They try to threaten free speech and start unwinding campaign finance laws and make it harder for young people and minorities to vote and poor folks to vote. They subsidize corporate polluters and hand out 1.5 trillion dollars in tax credits without saying how they will pay for them.

Partly because they figure when a Democrat like me has to come back in and clean up this stuff, they say ‘ oh these deficits are terrible’ and ‘that’s why we have to cut medicare’. What happened to all this concern about deficits?’

Obama Comes Out Swinging At Trump In California, Punches Himself In Face Instead (Video)