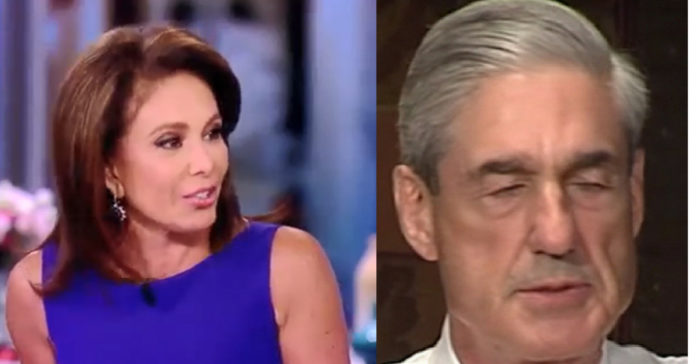 Judge Pirro just went there with Bob Mueller. She called into question the entire sordid affair that is threatening to bring down Trump with a simple question.

Why we aren’t getting the answer to this simple question is telling. As reported by Fox News:

Judge Jeanine Pirro said that the intentions behind Bruce Ohr and Christopher Steele’s relationship was to tee up an investigation by Special Counsel Robert Mueller.

She said the speculation about Ohr’s relationship with Steele — the Trump-Russia dossier author — and Fusion GPS co-founder Glenn Simpson, too, show further proof that President Trump is being framed.

Ohr’s wife, Nellie Ohr, worked for Fusion GPS, an opposition research firm that was hired by the Hillary Clinton campaign and the Democratic National Committee (DNC) to compile the dossier of potentially damaging information against Trump.

Pirro said that it was amazing how Ohr had nothing to do with the Russia probe, yet made himself a part of it in order to get Steele onto Mueller’s team.

She asked why the special counsel isn’t investigating the Ohrs, or former FBI officials like Andrew McCabe, Peter Strzok and James Comey.

“So here we have Bruce Ohr, who’s not just violating the law. He’s not even disclosing his wife is working for the agency paying for the fake dossier. Bob, are you stupid?”

Pirro also labeled Mueller as the government’s “serial cleaner.” She said he’s now panicking because he has nothing on Trump and that talks of subpoenaing him are ridiculous.