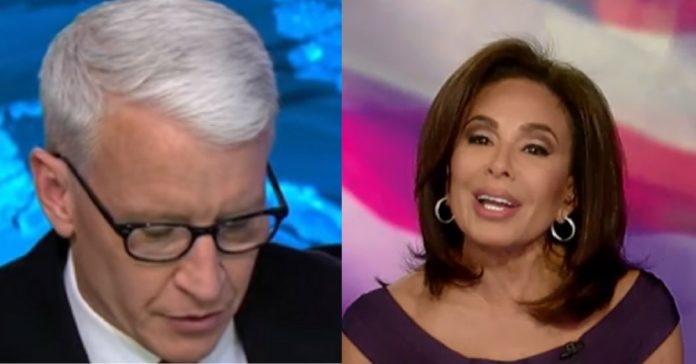 The media is freaking out over Trump’s latest move to fight back against Bob Mueller’s witch hunt.

The deep state is in full panic because they see the writing on the wall – Trump will fight tooth and nail and will not roll over like most people.

Trump is a fighter and if he is correct that he can pardon himself, and ultimately it will be the Supreme Court who decides this issue, the witch hunt is officially over.

“As has been stated by numerous legal scholars, I have the absolute right to PARDON myself, but why would I do that when I have done nothing wrong? In the meantime, the never ending Witch Hunt, led by 13 very Angry and Conflicted Democrats (& others) continues into the mid-terms!,” Trump wrote in a post on Twitter.

The media went bonkers calling Trump every name under the son, said he is abusing his power, said he was ruining the constitution.

Thankfully, Judge Jeanine Pirro has a TV show to combat the false narrative coming from CNN.

Jeanine and guest Anthony Scaramucci went over the sordid Clinton era full or scandalous pardons but none worse than Bill pardoning his brother Roger on drug charges.

Remember Marc Rich? How much did he pay to get his pardon?

Point is the pardon power is reserved for the President and when CNN likes the President he can do no wrong; when they dislike a president as they do with Trump, everything he does will be wrong, including who he pardons.