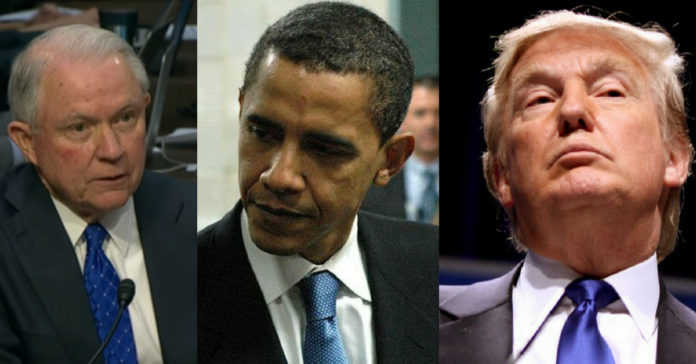 Jeff Sessions is on the hot seat and he is doing everything he can to keep his job. True, Sessions has been very good on some issues. but his recusal caused the witch hunt and Trump hasn’t forgotten.

It is under that pressure that Sessions’ DOJ just came out and smacked Obama hard with a legal maneuver that puts Obamacare, Obama’s signature policy achievement in jeopardy.

Thre is a lawsuit challenging Obamacare and the DOJ just sided against the law saying they will not defend it.

The Justice Department said last night that the Affordable Care Act’s individual mandate has become unconstitutional. Even more importantly, it says the law’s most popular provision — guaranteed coverage for people with pre-existing conditions — also has to go.

Threat level: The legal challenge at issue here may be somewhat of a long shot on the merits. But if it does ultimately succeed, it could toss out the hardest-fought and most significant parts of the ACA.

Someone needs to remind Jeff that Trump explicitly ran on keeping coverage for people with pre-existing coverages.

I don’t know how many times he said he wanted to keep that and with good reason.

100% of Americans agree that people with pre-exo=isting conditions should be able to afford healthcare.

It may be the last bipartisan thing left in DC that people agree on.

Right before the midterms, the DOJ wants to hand the Democrats the ultimate campaign ad?

If that is the GOP’s plan they will not only lose the house but the Senate as well. The only way Trump possibly gets hurt by Mueller – remember the Mueller probe is political, not criminal – is if the Democrats take the house and the Senate.

Taking the House will not be enough but if they have total control over Congress, Trump’s agenda will be stopped in its tracks and he will face the real possibility of impeachment.

It gets worse. From the Washington Times:

But they suggested the court consider ordering that as of Jan. 1 two parts of the law will be invalid: that people with preexisting conditions must receive coverage, and that they cannot be charged more than healthier consumers.

“This court should hold that the ACA’s individual mandate will be unconstitutional as of January 1, 2019, and that the ACA’s guaranteed-issue and community-rating provisions are inseverable from the mandate,” they wrote.

Those protections had been considered sacrosanct by most members of Congress, with GOP lawmakers fretting during their efforts last year over how to unwind Obamacare while still preserving those parts of the law.

So the DOJ is taking a position they will probably lose in court, that won’t even come into play until after the midterms, that goes against Trump’s desire and promise, and that hands the Democrats a tailor-made campaign issue where before they had none (they are only against Trump and all experts, even the dem experts, say they can’t sweep midterms on that message) and that the vast majority of Americans disagree with?

Is this guy nuts?

Trump is safe as long as the GOP holds Congress or at least one House. Handing the Democrats a winning issue right before the midterms when the economy is booming and Trump is winning is political malpractice.