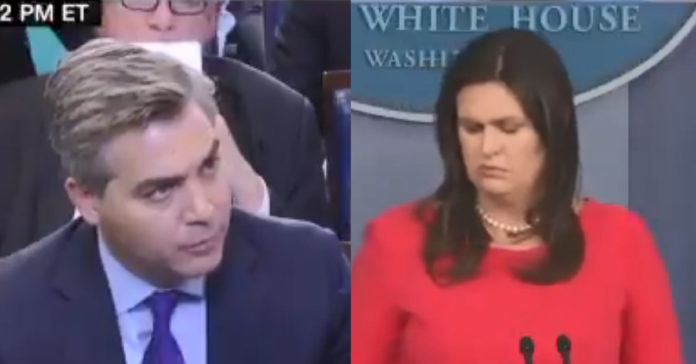 “Whether or not he told Vladimir Putin to stay out of US elections,” Acosta asked.

As if she was talking to a baby Sarah repeated, “Yes, the President made clear to Vladimir Putin that he should stay out of US elections.”

Sarah did read out a devastating list of actions Trump has taken against Russia after another question.

“The president … has been tougher on Russia than anybody,” Sanders shot back. “I think you can see that in all of the actions that he’s taken, whether it was a plant that was closed due to aluminum and steel tariffs that were put in place by this president, the Treasury Department has issued new sanctions on numerous individuals and entities in Russia.”

Sanders continued to rattle off the administration’s policies against Russia.

“The president has continued sanctions on Russia’s malicious cyber activity in response to election hacking. We’ve expelled 60 Russian operatives from the United States and closed two consulates. President Trump issued four statements condemning Russia’s poisoning of U.K. citizens on U.K. soil,” she continued. “Authorized the sale of lethal aid to Ukraine, authorized military strikes against the Assad regime in Syria and has repeatedly called out Russia’s actions, exporting energy to our allies in Eastern Europe.”

“Look, the president has been extremely tough on Russia and to say anything different is just not true.”

White House press secretary Sarah Sanders: “The President has made clear to Vladimir Putin that he should stay out of US elections” https://t.co/hQdWfu3FEl pic.twitter.com/620F1wkRL9