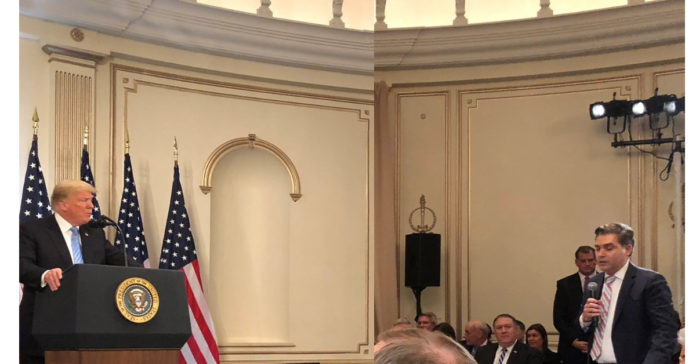 Jim Acosta continues to disgrace. What a joke of a reporter – look, the guy makes it all about him.

He is a total showboat – and that is not good for a reporter. They need to report not bask in the spotlight and be willing to do anything to keep their 15 minutes of fame alive.

Today Trump held one of his epic press conferences – he is by far the most open president we have ever had.

He took questions from all sides and of course, Jim Acosta had to be a rude little clown.

“Why is it, Mr. President, that you always seem to side with the accused and not the accuser?” Acosta asked.

“As far as women [go], allegations can go the other way also. I could pick a woman and she could have charges made against her,” Trump said.

Acosta asked again about the claims made against Kavanaugh, prompting Trump to rip the attorney of the latest accuser as a “lowlife.”

“You don’t get much worse” than Michael Avenatti, Trump said.

“Thank you very much,” Jim Acosta said after being called on by Trump. “If you don’t mind, after I’m finished, if…one of our female colleagues could go after me, that would be great. Mr. President, just to follow up on…”

“What does he mean by that? Explain,” Trump shot back.

“I think it would be great if a female…” Acosta said.

It would be great if a female reporter could ask a question about this issue,” Acosta responded.

“I wouldn’t mind that at all…wouldn’t make any difference to me,” Trump said.

Well, first of all, I wasn’t happy with Roy Moore. Let’s get that straight. But, Roy Moore was a–Republican candidate. And I would have rather had a Republican candidate win. I was very happy with Luther Strange. He was a terrific man from Alabama, but Luther Strange had a lot of things going against him. As far as women, whether it’s a man or a woman, these are–you know, it can happen the other way. Allegations can go the other way also–you understand that. And, whether it was a man or a woman, 30 years ago, 36 years ago–in fact, they don’t even know how many years ago, because nobody knows what the time is.

“Who is the dumbass who asked if the President would take a question from a woman and then refused to give the mic to a woman?”

Who is the dumbass who asked if the President would take a question from a woman and then refused to give the mic to a woman?

A bit of a back and forth with @Acosta who suggests @POTUS take a question from a female reporter next. pic.twitter.com/mnVXQNG5NL

Jim @Acosta's question: "Why is it, Mr. President, that you always seem to side with the accused and not the accuser?" pic.twitter.com/YjLPkZXmZK

JUST IN: In touchy exchange, CNN correspondent presses President Trump to call on a female correspondent during his news conference, which includes questions about the Kavanaugh confirmation, at the UN. pic.twitter.com/6TIdaBsSvf