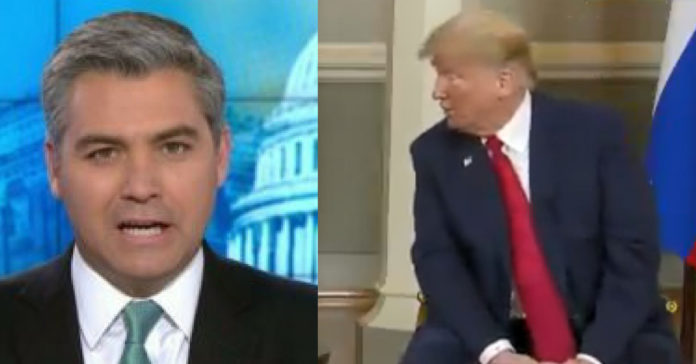 They finally admitted the truth about Trump and all the garbage they spewed before she be taken with a grain of salt.

This is the headline from a stunning CNN article:

“Trump’s right: The economy is doing well and he deserves some credit.”

More from the article:

President Donald Trump thinks he’s overdue some credit for steering the strongest economy on the planet — and he’s probably right.

“These numbers are very, very sustainable — this isn’t a one-time shot,” Trump said on Friday, speaking from the South Lawn of the White House after news that the US economy grew at a 4.1% annual rate in the second quarter of the year.

Fresh from a trip to the Midwestern heartlands, the President is making the very best possible case for his administration as the pace heats up ahead of the midterm elections. He’s belting out a strong economic message with a fervor that Democrats have yet to match this election cycle.

Presidents usually get too much blame when the economy is doing badly, since downturns are often caused by outside shocks or cyclical factors, but that also gives them a chance to crow when things are going full steam ahead.

Trump is not the kind of person to pass that up.

Often, the President’s hyperbolic assessment of his own performance is at odds with the facts. But Friday’s announcement that the economy grew at a 4.1% pace in the second quarter, the best showing since 2014, is genuine cause for celebration.

It’s no exaggeration to say that the economy represents Trump’s best argument heading into the fall. And Trump appears to be getting increasingly frustrated that the story is not being told.

Pointing at the press cameras during his trip to Illinois he complained: “They’re dying to see us make a little bit of a mistake.”

“Even though we’ve been here for a little more than a year and a half … we really hit it big over the last six months,” he said.

Trump can make a fair argument that he is not getting the credit he deserves on the economy, but he often has only himself to blame for it getting overlooked, given the daily political turmoil he creates.