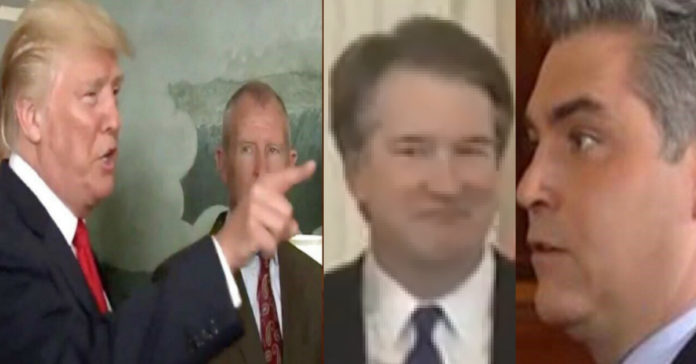 Jim Acosta is not the sharpest knife in the drawer. He thought he had Trump blocked today.

He led the charge of the liberal media brigade to stop Trump from picking Judge Brett Kavanaugh of the U.S. Court of Appeals for the D.C. Circuit to the Supreme Court.

Jim found and reported about an old legal opinion Brett wrote that pours cold water on the witch hunt.

Trump SCOTUS team has looked at Kavanaugh's past comments on indicting a sitting president, we've confirmed. In 2009, Kavanaugh wrote: "The indictment and trial of a sitting President, moreover, would cripple the federal government…" https://t.co/rDHJs5RiUY

And for the first time, Jim got something correct – every dog gets his day. Jim doesn’t, of course, didn’t report the whole story.

Brett has argued that  President should not be indicted or sued in civil court until he finishes his term.

But he also says no one is above the law, and that a President could and should be tried and sued after he leaves office.

The Democrats don’t have the votes block Brett or do to do anything about this qualified voice, but like Acosta they will try to protest.

“A serious constitutional question exists regarding whether a president can be criminally indicted and tried while in office,” Kavanaugh, a D.C. Circuit Court of Appeals judge, wrote in an article in 2009.

“One might raise at least two important critiques of these ideas,” Kavanaugh acknowledged in his essay published in the Minnesota Law Review. “The first is that no one is above the law in our system of government. I strongly agree with that principle. But it is not ultimately a persuasive criticism of these suggestions. The point is not to put the president above the law or to eliminate checks on the president, but simply to defer litigation and investigations until the president is out of office.

“A second possible concern is that the country needs a check against a bad-behaving or law-breaking president. But the Constitution already provides that check. If the president does something dastardly, the impeachment process is available.”

Adding further fuel to the liberal fire, Brett said this about rule of law in a short speech after Trump picked him.

“The framers established that the Constitution is designed to secure the blessings of liberty. Justice Kennedy devoted his career to securing liberty. I am deeply honored to be nominated to fill his seat on the Supreme Court.”

“My judicial philosophy is straightforward. A judge must be independent and must interpret the law, not make the law. A judge must interpret statutes as written, and a judge must interpret the Constitution as written, informed by history and tradition and precedent. For the past 11 years, I’ve taught hundreds of students, primarily at Harvard Law School. I teach that the Constitution’s separation of powers protects individual liberty, and I remain grateful to the dean who hired me, Justice Elena Kagan. As a judge, I hire four law clerks each year. I look for the best. My law clerks come from diverse backgrounds and points of view. I am proud that a majority of my law clerks have been women.”

“I will tell each senator that I revere the Constitution. I believe that an independent judiciary is the crown jewel of our constitutional republic. If confirmed by the Senate, I will keep an open mind in every case, and I will always strive to preserve the Constitution of the United States and the American rule of law.”

Liberals like Jim Acosta need to get ready for the next 50 years of the rule of law and the constitution being respected by conservative judges, not trampled by activist liberal judges.