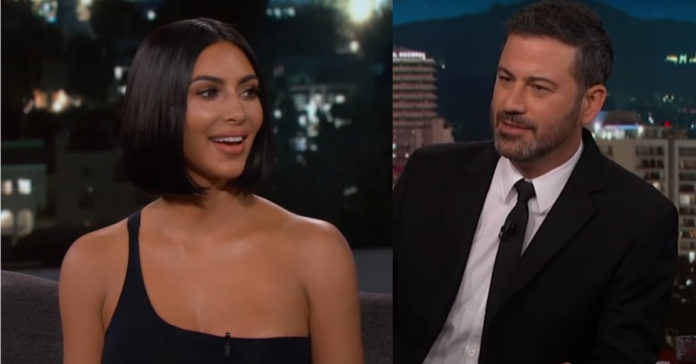 Jimmy Kimmel was hoping for another Trump bashing episode to boost his sagging ratings when he had a visit from Kim Kardashian.

Instead, he got a brutal dose of truth from the Hollywood superstar. Look, the media and Hollywood can’t get their heads around it when someone speaks the truth about Trump because it shatters that narrative.

Monday on ABC’s “Jimmy Kimmel Live,” Kim Kardashian West said she had nothing bad to say about President Donald Trump while telling the story of lobbying the president to pardon Alice Marie Johnson.

On her husband Kanye’s support of Trump, Kardashian West said, “To make it clear when Kanye —we would talk about it and would talk about policies, he doesn’t necessarily agree with his policies. He likes his personality and how he made it to be president when everyone really underestimated him.”

She added, “I have nothing bad to say about the president. You know, he’s done something amazing. I am very focused. I don’t agree with everything either. I had no idea what to expect going in there, and I was like, ‘Look, I’m going to be focused.’ It really turned my idea around in this category.”

Jimmy Kimmel Tries To Shame Kanye For Supporting Trump, Kanye Embarrasses Him On His Own Show