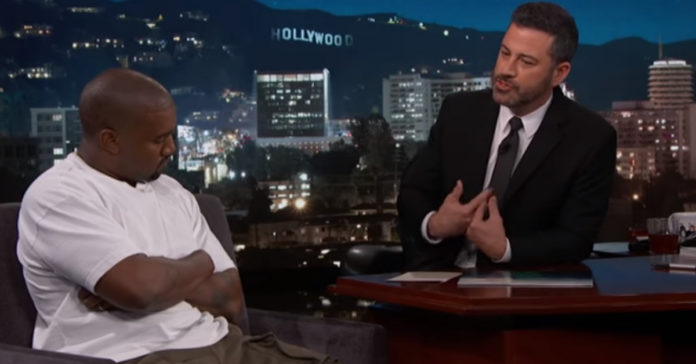 Jimmy Kimmel was at it again last night trying to bully people into withdrawing support for President Trump.

They really cannot believe how anyone, let alone a black man like Kanye West can actually support President Trump.

So the bully and bully and it usually works. But not last night.

In an appearance on Jimmy Kimmel’s late-night show, the rapper defended his most recent opinions about the president

Rapper Kanye West has inspired very mixed reactions since admitting he admires such prominent conservatives as the president of the United States and commentator Candace Owens.

“Just as a musician, African-American, guy out in Hollywood, all these different things, you know, everyone around me tried to pick my candidate for me,” the rapper told Kimmel, who of course is an outspoken anti-Trumper. “And then told me every time I said I liked Trump that I couldn’t say it out loud or my career would be over. I’d get kicked out of the black community because blacks — we’re supposed to have a monolithic thought, we can only, like, we can only be Democrats and all.”

West said it took over a year for him to have the “confidence to stand up.”

And fans knew his true feelings when they saw him wearing a Make America Great Again hat.

He continued, “And what it represented to me is not about policies — because I’m not a politician like that. But it represented overcoming fear and doing what you felt, no matter what anyone said, in saying, you can’t bully me.”