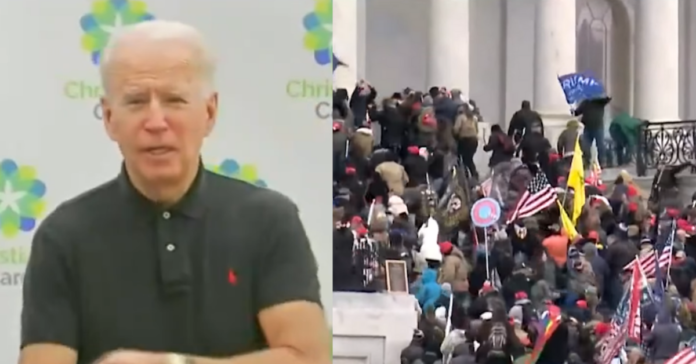 Joe Biden broke his silence and it is not good for the Capitol rioters. Congressional leadership has used the strongest language to describe the riots from the jump.

They have called it “domestic terrorism, sedition, and armed insurrection” and this is not just the Dem leadership.

It is also the GOP leadership and according to multiple reports, the GOP almost has the votes to convict Trump in the Senate.

Nancy Pelosi came out last night and said Trump should be prosecuted and that all the rioters need to be held to account.

Alan Dershowitz said Trump has the right to free speech and convicting him for what he said before the riot will not be easy.

And now we have Biden saying, “But I think it’s critically important that there be a real serious focus on holding those folks, who engaged in sedition and threatened people’s lives, defaced public property, caused great damage, that they be held accountable,” Biden said.

“I think that’s a view that’s held by the vast majority of Democrats and Republicans in the Congress.”

Asked if he was worried that the looming impeachment efforts against Trump would hurt chances of passing a stimulus, Biden said has talked with Congress about a way to “bifurcate” Trump’s impeachment and fast-tracking his agenda.

“Can we go half a day on dealing with the impeachment, and half a day getting my people nominated and confirmed in the Senate, as well as moving on the package,” Biden said.

President-elect Biden says he's not afraid to take his oath of office outside after the Capitol unrest, but says there should be "real, serious focus" on holding accountable people "who engaged in sedition and threaten people's lives" https://t.co/Nj065CIsxp pic.twitter.com/m9HXktWyts

“I think that’s a view that is held by the vast majority of Democrats and Republicans in the Congress.” pic.twitter.com/Uwe6RKwe4t