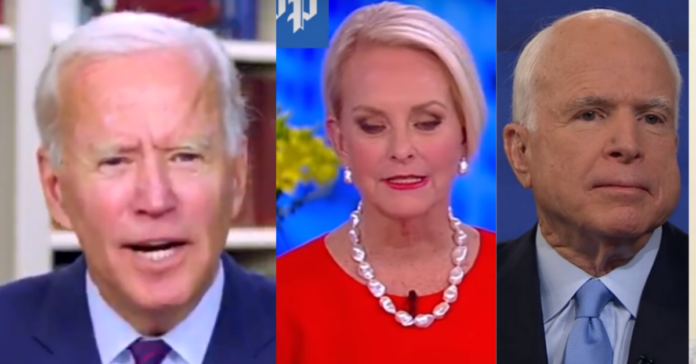 Joe Biden is reportedly considering giving a key job in his administration to Cindy McCain. According to reports from London, Biden may pick her to serve as ambassador to the U.K.

With Brexit still not complete this will not be good news for Boris Johnson as he would need a strong deal with the USA should Brexit solutions falter.

McCain, the widow of late Sen. John McCain (R-Ariz.), has been a vocal critic of President Trump, and endorsed Biden during his campaign. She is a known Anglophile, The Independent notes, and is thought to be a front runner in return for helping Biden flip Arizona.

“It’s hers if she wants it,” a source told The Times. “She delivered Arizona. They know that.”

The Hill has reached out to Biden’s transition team for comment.

Biden became the first Democrat to win Arizona since 1996. Some Democrats say it was endorsements from McCain and Sen. Jeff Flake — two respected Republicans from the state — that pushed Biden over the top.

The two Republicans, who both said that Biden would restore civility and honor to the White House, have been floated for Biden administration posts, with McCain possibly serving as a top ambassador or another diplomatic post.

Biden gave McCain a speaking slot during the Democratic National Convention, and named her to his transition’s advisory board. While she’s never held public office, she had a front row seat to international diplomacy traveling around the world with her late husband, whom Trump repeatedly disparaged.