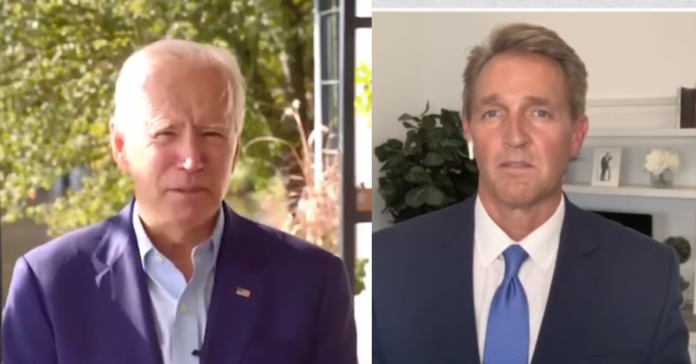 Democratic presidential nominee Joe Biden is making some on the left angry with a report that he is considering several Republicans for Cabinet positions in the event he wins in November.

The names will not surprise you at all but may make Trump pissed because Biden is reportedly looking at Trump nemesis’ Jeff Flake and John Kasich.

“My primary concern is that he involves people in the Cabinet who push back against corporate power and support a massive economic stimulus and the broad provision of health care,” said David Segal, the executive director of a liberal who is not happy Biden is even thinking about this. “Unfortunately, there are no prominent Republicans I know of who are on board with that agenda.”

One person close to the Biden transition said it remains “a priority to have options” from different parts of the ideological spectrum for the former vice president to consider.

That person and another official familiar with the transition deliberations confirmed to POLITICO that Biden staffers are analyzing some Republicans’ backgrounds and resumes as they compile shortlists of candidates for high-profile Cabinet positions. The goal is to have some GOP options among the finalists that Biden would choose from after the election.

Among the names being floated for possible Biden Cabinet posts are Meg Whitman, the CEO of Quibi and former CEO of eBay, and former Ohio Gov. John Kasich, both of whom spoke at August’s Democratic National Convention.

Massachusetts GOP Gov. Charlie Baker and former Sen. Jeff Flake (R-Ariz.) have also been mentioned, as has former Rep. Charlie Dent (R-Pa.), who resigned from Congress in 2018 and became a lobbyist.

When asked for comment, a spokesperson for the Biden transition said only that the team is not making any personnel decisions before the Nov. 3 election, but stressed that “diversity of ideology and background is a core value of the transition.”

Nominating a Republican to the Cabinet would be the latest in a series of steps Biden has taken to extend an olive branch across the aisle. His campaign regularly holds calls with a group of officials who have endorsed him, including Republicans.

After giving multiple GOP supporters prime speaking slots at his August convention, he tapped others for roles on his transition team, including Cindy McCain, the wife of the late Republican Sen. John McCain.

“This plays to Joe Biden’s comfort zone,” said one former Republican member of Congress who is close to the Biden transition.

“If you’re Joe Biden, of course you’re going to want to expand your base a little bit, show some outreach to the other side.”

Tapping a GOP candidate to lead a federal agency could be an easy and early way to reward Republicans who endorsed him before the election and signal his intent to bridge the country’s partisan divide. But it could also alienate Democrats already worried whether a nominee who has long styled himself as a moderate will pursue progressive policies once in office.

“I don’t understand why someone who says, ‘I am the Democratic Party,’ would then hand benefits to someone who’s not a Democrat,” said Jeff Hauser, director of the the Revolving Door Project, a left-leaning advocacy group he founded in 2015 to scrutinize executive branch appointees.