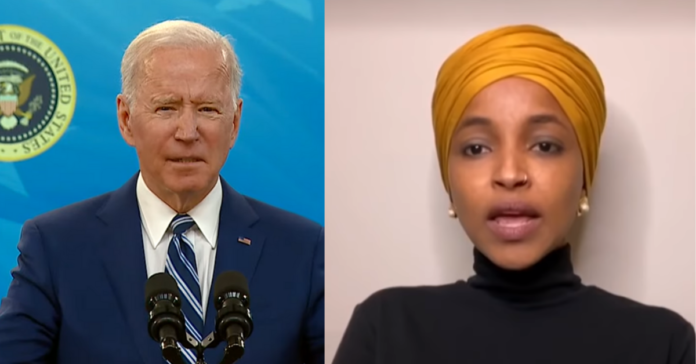 President Biden snubbed Ilhan Omar and House Speaker Nancy Pelosi when he signed an order speeding refugee admissions to America but kept the 15,000 a cap set by the Trump administration. This is a historically low number and Biden had promised to raise the limit substantially.

He also did not raise the ceiling to at least 62,500 as Democrats including Speaker Nancy Pelosi (D-Calif.) and Rep. Ilhan Omar (D-Minn.), asked him to do.

“But until the Emergency Presidential Determination is finalized, our refugee policy remains unacceptably draconian and discriminatory,” they added.

“I can assure anyone who has concerns that the president remains committed to this issue. He is somebody who believes that refugees, that immigrants are the heart and soul of our country, and they have been for decades,” Biden spokesperson jen Psaki said.

“And it certainly is an issue he remains committed to. But I don’t have an update on the timeline of the signing,” she added.

Biden faced swift backlash from Democrats in Congress, who had been publicly calling on him to follow through with his commitment.

“The United States has a proud, bipartisan tradition of providing refugees protection through resettlement,” Sen. Bob Menendez, D-N.J., chairman of the Senate Foreign Relations Committee, said in a statement. “Failing to issue a new Determination undermines your declared purpose to reverse your predecessor’s refugee policies.”

“As a refugee, I know finding a home is a matter of life or death for children around the world,” she wrote on Twitter.

Completely and utterly unacceptable. Biden promised to welcome immigrants, and people voted for him based on that promise.

Upholding the xenophobic and racist policies of the Trump admin, incl the historically low + plummeted refugee cap, is flat out wrong.

Confirmed from a WH official on refugee cap: President Biden will keep the refugee cap number at 15,000. He is going to be changing the regional allocation of those refugees.

Note: This is Biden is walking back an earlier pledge to welcome more than 60,000 refugees into the U.S.

JUST IN: President Biden is keeping the cap on the number of refugees admitted into the U.S. this year at 15,000 — the level that was set by the Trump administration last fall.

Biden promised during the campaign to raise the cap to 125,000.