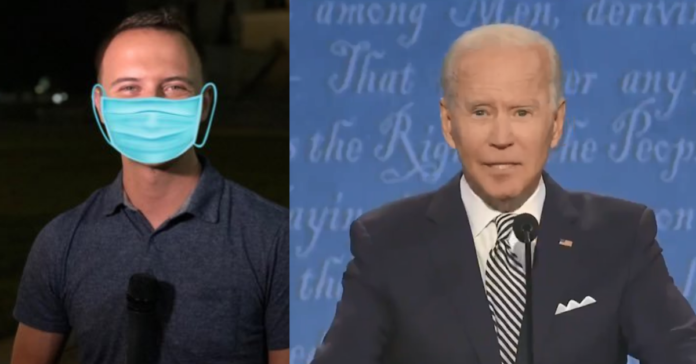 A CBS reporter Bo Erickson asked Joe Biden a question about the Hunter Biden story and Joe snapped right back.

Bo caught up with Biden as he exited his plane after a long day and asked Joe: “What is your response to the NYPost story about your son, sir?”

Joe called it a “smear campaign” before saying, “I know you’d ask it. I have no response, it’s another smear campaign, right up your alley, those are the questions you always ask.”

“Biden has been hammered for refusing to tell voters whether he will support packing the Supreme Court.

This however concerns emails where there are not just allegations of influence peddling worth millions coming from China, Russia, and Ukraine but references his possible knowledge or involvement. As I wrote recently, there is a striking refusal of the Biden campaign to offer the expected responses to such allegations.

I have expressed my skepticism over how this laptop was found and when it was disclosed publicly. This could very well be the work of foreign intelligence.

However, as I discussed this morning in the Hill, that does not mean that the emails and photos are fabricated.

Many of us have long denounced Hunter Biden’s work as a classic influence peddling scheme. That does not make it a crime, but it is a common form of corruption in Washington.

These emails however, if true, would contradict Joe Biden’s past statements of his lack of knowledge or involvement. Moreover, it would shatter Joe Biden’s repeated assurance that his son did “nothing wrong.”  One can argue over whether this is a crime, but few would say that there is nothing wrong with raw influence peddling worth millions with foreign entities.

Now however the question is how other journalists will respond. ABC has yet to even air the allegations and failed to ask a single question to Biden on the scandal during the recent town hall event.

Whether these emails are fabricated or authentic, this story is major news. The question is whether there are major news organizations willing to report it.”

I asked Joe Biden: What is your response to the NYPost story about your son, sir?

He called it a “smear campaign” and then went after me. “I know you’d ask it. I have no response, it’s another smear campaign, right up your alley, those are the questions you always ask.” pic.twitter.com/Eo6VD4TqxD