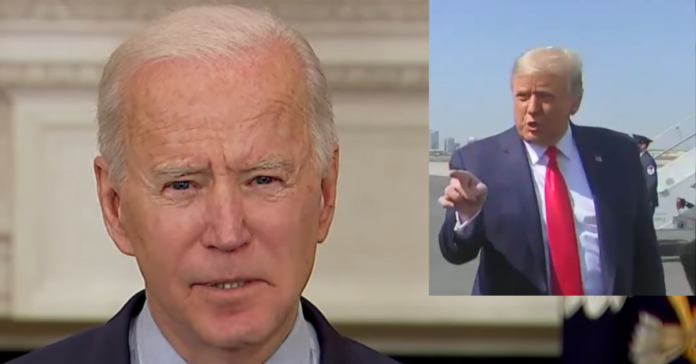 Joe Biden just got some more bad news and this one may hurt him badly. A new report from Politico claims that Biden is under investigation for halting Trump’s border wall construction after Congress authorized monies for it.

The Government Accountability Office is reviewing Biden’s order to halt construction to see if he broke the law by stopping the flow of money to the wall effort. If you recall, on Biden’s first day in office he ordered a pause to any money going to build the wall on the southern border.

The budget rules that mandate Congress controls the flow of money in our country are enshrined in the constitution and Biden could face serious repercussions over his move. Trump was impeached for not giving aid money to Ukraine that Congress authorized if you remember recent history.

From The New York Post: A government agency has launched an investigation into whether President Biden broke the law by halting construction of the border wall begun by former President Donald Trump, according to a report.

Biden on his first day in office stopped building the wall even though Congress had approved $1.4 billion last December for it, Politico reported on Tuesday.

The Government Accountability Office has initiated an inquiry into whether the president broke any laws by freezing the funds, a violation of budget rules.

Now the Government Accountability Office is launching a review to determine whether the new president broke the law by freezing the money in violation of budget rules designed to keep Congress in control of the cash flow, the federal watchdog confirmed this week.

An unfavorable ruling from GAO would bolster Republicans in branding Biden as a rule-breaker as they blame him for the surge of migrants and unaccompanied children at the southern border. The pause on spending “directly contributed” to that flood of border crossers, Senate Republicans said in their plea last week for GAO to opine on the issue. More than 70 House Republicans followed Tuesday in asking for a GAO opinion, which the watchdog typically provides whenever a member of Congress requests one.

Besides, Republicans say, Biden should know better after more than 30 years as a senator, as Sen. Roy Blunt (R-Mo.), chair of the Senate Republican Policy Committee, put it.

“He was in the Congress a long time,” Blunt said in an interview. “He knows it’s the Congress’ job to authorize how the money is spent and the president’s job to spend it efficiently.”

…The probe highlights the challenge presidents have historically faced in fulfilling campaign promises that require money to be spent — or suspended — at odds with Congress’ intent. During his administration, Trump shifted money away from accounts for things like military construction projects to pay for the border barrier as he struggled to get congressional Democrats to agree to the funding levels needed to build the “big, beautiful wall” he promised his supporters. Now Biden is facing trouble in trying to turn off that funding spigot after saying last year that “not another foot of wall” would be constructed during his administration.

“The Biden administration has to be really careful about doing stuff like this, because otherwise they’re just going to be doing the exact thing the Trump administration did — just at the other end of the policy spectrum,” said Dylan Hedtler-Gaudette, a manager at the watchdog group Project on Government Oversight.