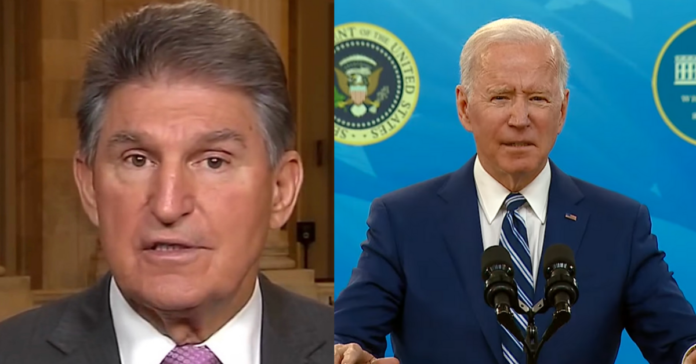 “If I don’t vote to get on it, it’s not going anywhere,” Manchin warned Biden, Schumer, Pelosi, and the rest and truer words have never been spoken in Washington D.C.

“As the bill exists today, it needs to be changed,” Manchin told Metro News host Hoppy Kercheval. “It’s more than just me, Hoppy. There’s six or seven other Democrats who feel very strongly about this. We have to be competitive, and we’re not going to throw caution to the wind.”

“The president felt it was responsible to propose a way to pay for his proposals,” White House press secretary Jen Psaki said when asked about Manchin’s comments.

“That’s exactly what he did. He knows some members think it’s too big, some think it’s too small. We fully expect that from Sen. Manchin and other members.”

Trump has voiced opposition to Biden’s “radical” and “largest tax hike in American history” as a “massive giveaway to China” that will displace thousands of “factories, millions of jobs, and trillions of dollars to these competitive Nations.”

The legislative push has also been opposed by congressional Republicans, who believe the proposal encompasses components “beyond traditional investments in railways, bridges, and roads to include subsidies for eldercare, affordable housing, and research and development to address the warming of the globe,” Breitbart News reported.

“Biden’s plan includes the largest tax hike in nearly three decades, but of course, coastal elites will have their taxes slashed.

It will strip Americans of their right to work by forcing them to join Democrat-backed unions.”

Manchin has signaled for weeks that he wants to include Republicans in talks over an infrastructure package and then pass a bipartisan bill that could get the 60 votes needed to override a filibuster. He wants to avoid using a partisan budget process called reconciliation to pass it with only Democratic votes.

A ruling from the Senate parliamentarian about whether Senate rules allow them to use that process to pass the infrastructure bill, as they did the $1.9 trillion Covid relief bill earlier this year, could come this week

“We have to have our Republican friends work with us too,” Manchin said in the interview. “They just can’t be against everything thinking this going to be political posturing we are going to take for the 2022 elections.”