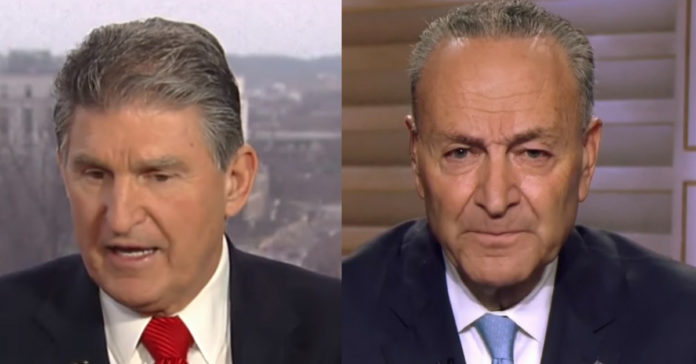 Chuck Schumer is the worst kind of political opportunist. There is nothing worse than a Washington DC cynic.

Schumer has that rare combination of arrogance and hypocrisy that drives Americans to stay at home on election day (see Hillary).

That said, it was good to finally see some ethics and principle coming from the left today. Chuck Schumer jumped on his high horse and tried to block Brett Kavanaugh because of Michael Cohen’s plea as if that has anything to do with anything.

Most Democrats jumped on the bandwagon and Schumer was riding high, smirking to any TV camera that would have him.

Enter Joe Manchin. From The Hill:

Manchin noted that Democratic leaders had not looped him in on the strategy that was announced earlier on Wednesday, a day after Cohen pleaded guilty to tax and bank fraud and campaign finance violations in federal court in New York.

“I have no clue. No one has discussed this with me at all. They know my feelings on this, you know? We’ve got a nominee that the president has put forward. We have an advise and consent job,” Manchin told reporters.

His comments Wednesday came as Senate Democrats seized on news of Cohen’s guilty plea from the previous day to try to delay Kavanaugh’s confirmation hearings, which have been planned to start on Sept. 4.

“Calls to delay the hearing are just the latest tactic from opponents who decided to vote ‘no’ weeks ago, frantically looking for anything that sticks. The hearing will begin as planned on September 4,” said George Hartman, a spokesman for Senate Judiciary Committee Chairman Chuck Grassley (R-Iowa).