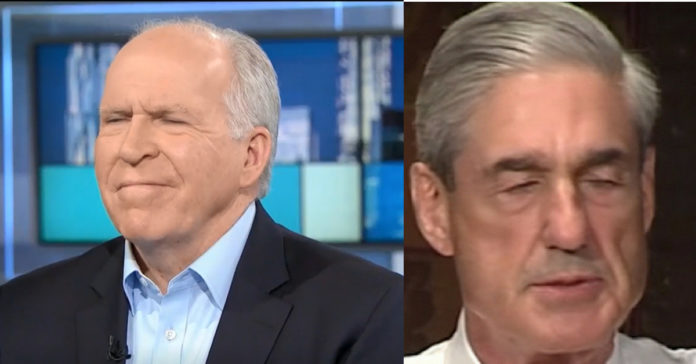 Another day, another myth shattered. A Bob Mueller myth that is and it is a shocker.

First came the news yesterday that George Papadopoulos is not helping Mueller on the Russia investigation and that he was basically just nabbed for lying.

If he is a key piece of the puzzle and he has nothing on collision it is not looking good for Bob Mueller.

Add to that the walk back last night by John Brennan, who had accused Trump of treason but now says that is not the case.

As reported by Breitbart: On Friday’s broadcast of MSNBC’s “Rachel Maddow Show,” former CIA Director John Brennan stated that he didn’t mean President Trump committed treason when he referred to the president’s performance at the Helsinki summit as “nothing short of treasonous.”

Host Rachel Maddow said, “After Helsinki, you were stark, and even a little bit scary in your criticism of his behavior. You said it rose to treason.”

Brennan responded, “I said it was nothing short of treasonous.”

Maddow then stated, “In this current controversy, that specific comment has been singled out by a number of people as a comment that maybe, by you, crossed the line, that was maybe –.”

Brennan cut in to respond, “Crossed what line?” He continued that he has a right to free speech

Maddow responded that she wasn’t questioning whether Brennan had the right to make those remarks, and then asked, “But do you stand by that consideration, and can you explain, can you elaborate what you mean by treasonous? It’s a very serious allegation.”

Brennan answered, “I know what the Russians did in interfering in the election. I have 100% confidence in what they did. And for Mr. Trump to stand on that stage in Helsinki, with all the world’s eyes upon him, and to basically [say] he wouldn’t — he doesn’t understand why would the Russians interfere in the election. He’s given Mr. Putin and the Russians a pass time after time after time, and he keeps referring to this whole investigation as a witch hunt, as bogus, as — and to me, this was an attack against the foundational principle of our great republic, which is, the right of all Americans to choose their elected leaders. And for Mr. Trump to so cavalierly just dismiss that, yes, sometimes my Irish comes out, and — in my tweets, and I did say that it rises to and exceeds the level of high crimes and misdemeanors and is nothing short of treasonous. … I didn’t mean that he committed treason, but it was a term that I used, nothing short of treasonous.”