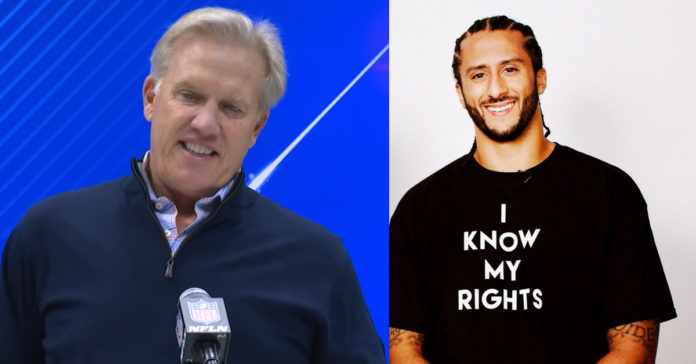 Colin Kaepernick just got exposed as a total and absolute fraud and there is simply no going back.

Hall of Fame quarterback and current Denver Bronco executive he makes all the football calls for the organization just admitted he offered Kaepernick a job.

If you remember Colin is suing the NFL saying he is being blackballed. There goes the lawsuit.

But worse, it appears the only thing holding Colin back is his ego as Elway offered him a backup job.

The Denver Broncos are in desperate need of a backup quarterback after the Paxton Lynch experiment looks all but failed.

Despite the alleged “blackballing” of NFL teams on the back of the lack of interest shown in the former Super Bowl quarterback, NFL Network’s James Palmer is reporting that the Broncos did, in fact, offer a contract to Kaepernick, only to have it turned down.

“Colin had his chance to be here. We offered him a contract.” John Elway when asked about Keapernick as a viable option if they look for a veteran backup QB on the open market.

Elway on Kaepernick as an option for a vet backup QB spot: “Colin had his chance here. We offered him a contract. He didn’t take it. So, As I said it in my deposition, I don’t know if i’ll be legally able to say this, but he’s had his chance to be here. He passed it"