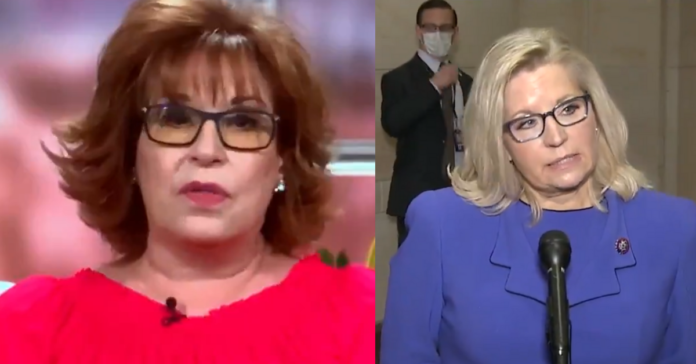 Joy Behar just sank what was left of Liz Cheney’s career in GOP politics with a ringing endorsement. You can already see the ads in the Wyoming primary playing over and over with Behar’s words to show how out of touch Cheney is. Behar trashed the ‘cowards’ in the GOP before calling Liz Cheney ‘Joan of Arc’ for standing up to the GOP heretics.

“She is the Joan of Arc, standing up to the heretics at this point. And so she is very lonely in that position,” Behar said. “I do have faith though that she is a tough cookie and intends to persevere. It is rather refreshing to see somebody stand up to the QAnon party, who’s not afraid to lose her job like the rest of those cowards who are shivering and quivering in the corner that they may have to go back to their old lives.”

Behar ripped certain members of the GOP for continuing to make the claim that the election was stolen: “In this instance, we may lose our democracy. So, why anybody is a Republican at this point is something I cannot fathom,” Behar said.

“I don’t agree with much of Liz Cheney’s politics if any at all. I’m leaving a little room for error. But I do respect her right now because she is standing up for the truth.”

Meghan McCain ripped Elise Stefanik and praised Cheney as well. From The Decider:

The conservative co-host pointed out that while Cheney has a “hyper-conservative” voting record, her replacement, Rep. Elise Stefanik, is “much more centrist and mushy in the middle politically.” Sharing a “throwback” with viewers, McCain recalled a photoshoot for Elle Magazine’s ’30 Women at 30′ in which she was photographed alongside Stefanik, then the youngest woman ever elected to Congress. While she was in awe of the young politician then, she’s since changed her views.

“At the time, I can remember thinking, ‘Oh my God, she’s so impressive, this is so exciting,’” McCain said. “And then … to see this turn, where a woman who is generations older than me, Liz Cheney, is fighting for what I believe to be the future of the party, and Elise Stefanik, a woman who is a millennial and is my age, who is doubling, tripling, quadrupling down at the altar of Trumpism.

“I think that’s what’s most disappointing to me in all of this, is that my generation of leadership is also failing us,” she continued.

“If you just look at numbers and stats, we are bleeding millennials. It’s a joke. So the idea that a millennial woman would know that and then still continue to double down in this way, I don’t understand it.”

What McCain suspects as a main motivator for those in her party is power, which she described as “the ultimate aphrodisiac.”

Power is “the ultimate antidote” and “the opiate of the masses,” McCain added. “People in D.C., it is their heroin,” she said.

“Apparently, power is better for some people than being able to sleep at night with what you believe and actually think. I don’t believe that she actually believes what she’s saying. I think she’s just doing it for power, and that is, for me, the saddest moment of this morning.”

.@JoyVBehar on Rep. Liz Cheney: “It is rather refreshing to see somebody stand up to the QAnon party who is not afraid to lose her job like the rest of those cowards who are shivering and quivering in the corner.” https://t.co/OtB5sDxzDd pic.twitter.com/J7CkmvAiWh

.@MeghanMcCain: “Liz Cheney is fighting for what I believe to be the future of the party and Elise Stefanik, a woman who is a millennial … is doubling, tripling, quadrupling down at the altar of Trump-ism — I think that’s what’s most disappointing to me.” pic.twitter.com/Scq8DxTl74