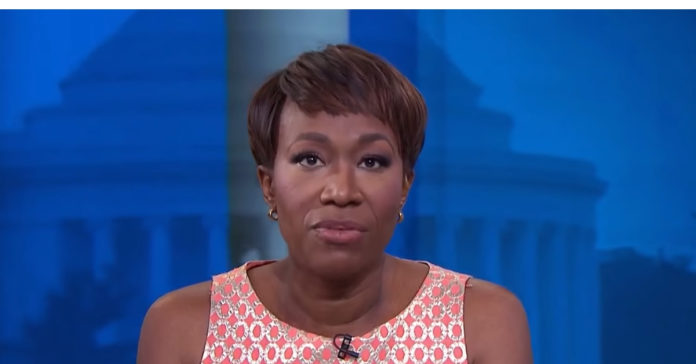 Joy Reid was once the darling of the left until some old blog posts surfaced that showed the real Joy and it wasn’t pretty.

As far as Trump and the GOP, Joy has never been a fan and the feeling is mutual. But when people in power go too far they must be held accountable.

As this brave Trump supporter is doing by suing her for defamation.

As reported by The Wrap: A California woman named Roslyn La Liberte has filed a defamation lawsuit against Joy Reid, accusing the MSNBC star of spreading a false claim that La Liberte hurled racial slurs toward a teenage boy while attending a Simi Valley, Calif., city council meeting in June.

Reid latched onto a viral photo of La Liberte, wearing a MAGA hat and appearing to be in a heated conversation with a hoodie-wearing boy, that went mega-viral at the time.

But the young man, 14-year-old Joseph Luevanos, told local news that La Liberte had been “civil” and was even recorded hugging her at another moment during the meeting.

“Reid used her substantial social media presence, fame, and reputation as a hard-hitting journalist to publish to her many followers that Plaintiff Roslyn La Liberte (“La Liberte”) screamed abhorrent racial slurs at a fourteen (14) year old boy,” according to the suit, filed Tuesday in Eastern District Court of New York.

The suit says that Reid targeted La Liberte because she was a Trump supporter.

“Reid set out to destroy La Liberte because she disagrees with La Liberte’s MAGA hat and the beliefs Reid ascribes to those wearing that hat conflict with her ideology,” the suit reads, going on to claim that “Reid published without any basis in fact” charges that La Liberte had screamed at the young man and called him a “dirty Mexican.”

Reps for Reid at MSNBC (which was not named in the suit) declined to comment. Reid’s lawyer John Reichman also did not immediately respond to request for comment from TheWrap over the suit.

The anchor apologized to La Liberte on Twitter after receiving a “retraction demand,” according to the suit. La Liberte says the episode led to “hundreds if not thousands of hate messages” and “threats on her life.”

It appears I got this wrong. My apologies to Mrs. La Liberte and Joseph. https://t.co/J8vZsCwAvs

Trump is MAD as HELL! President comes out SWINGING Monday Morning. This is BAD NEWS for Mueller.