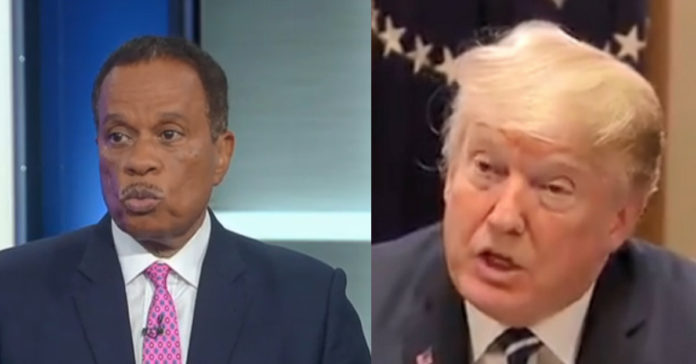 It’s time Juan. Time to move over to a liberal network where you belong. Why does Fox keep putting this guy on the air?

What does he bring to the table save the boring and tired Democratic talking points?

As reported by Fox News: Juan Williams said Thursday on “The Five” that Donald Trump is the “snowflake president,” given all of his gripes with press coverage and allegedly unfair practices by bureaucrats in his administration.

Reacting to discussion on Trump’s war of words with Watergate reporter Carl Bernstein — who Trump said “thinks like a degenerate fool” — and several media outlets, Williams said it shows a pattern of complaints by the president.

“He’s going on about ‘alternative facts’ and ‘fake news’ — Oh gee, I wonder what the FBI had to say when he picked up on this conservative report saying Hillary [Clinton’s] emails were hacked by the Chinese,” Williams said.

He said that after Trump publicly mentioned the report, the FBI came out and dismissed the claim. However, at least one Republican lawmaker, Rep. Louie Gohmert of Texas, has stood by it.

“Then he goes after Lester Holt,” Williams remarked. “So, exactly who has trouble telling the truth? … I think it’s one guy named Donald Trump.”

“He’s got a grievance, and he can’t get beyond [it]… I want to give him a safe space,” Williams said.