Sheriff David A. Clarke is the ultimate law enforcement officer, a total bad-ass, who commands respect and gets it. He is the epitome of what this country needs to get rid of political correctness, and protect our citizens from terrorists, and violent protesters. He refers to the Soro’s paid protesters, Black Lives Matters thugs, and vandals, as the “resistance movement,” and he intends to keep them in line! (VIDEO BELOW)

Monday night on the Sean Hannity Show, Sheriff Clarke came on to discuss President Trump’s early successes with him. Sean acted like he might have heard some inside information about Sheriff Clarke joining the Trump team, and he asked the Sheriff about that.  (VIDEO BELOW)

Sheriff Clarke is a very, very serious guy. He rarely smiles, never laughs, or blushes on TV. Watch what happens when Hannity asks him about joining the Trump team! His face changes from the most serious man on the planet, to a cross between the Cheshire Cat and a giddy schoolgirl. Even though he’s black, you can almost see his face turn bright red. Does that mean he’s joining the Trump team? I sure hope so. Our country needs him!   (VIDEO BELOW)

Well what to do think? Here is the full interview. It’s only 5 minutes, and it is awesome! Please SHARE this if you think Sheriff Clarke would make a great member of the Trump team! Thanks!  🙂

Please SHARE this if you think Sheriff Clarke would make a great member of the Trump team! Thanks!  🙂 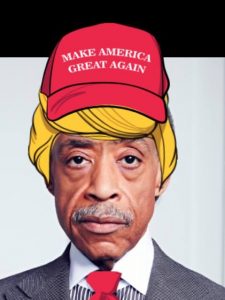