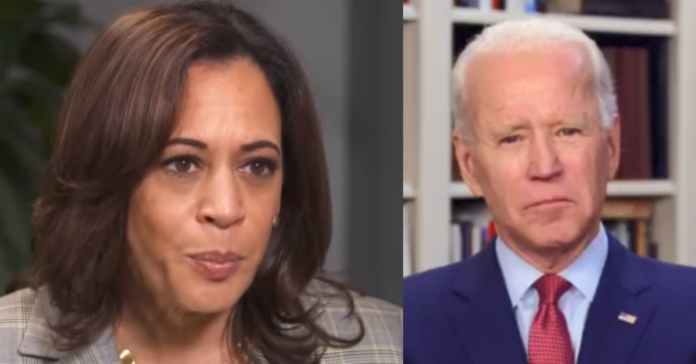 Vice President Kamala Harris just made her first big political blunder and it will come back to haunt her and Joe Biden.

Look, we all know what is going to happen – Biden is going to have to go back to using Trump’s strategy down at the border although they will define it differently for the media.

Even the Democrats know we can’t have open borders and there is no end in sight as poor Central American countries will not suddenly get competent government or functioning economies anytime soon.

So as the crisis deepens and the Biden admin is putting its head to try to avoid the inevitable Kamala was asked a softball question.

She handled it poorly in a bad sign for Biden.

She laughed out loud when a reporter asked if she was planning a trip to the border and it was caught on tape.

“Not today,” Harris said as she let out a loud laugh when asked if she had plans to visit the border outside Air Force Two in Florida on Monday.

The pushback comes as local leaders in states along the southern border have decried the Biden administration’s immigration policies, demanding more transparency and the activation of forces such as the National Guard to help with the surge.

“The Biden administration has been an abject failure when it comes to ensuring the safety of unaccompanied minors who cross our border,” Texas Gov. Greg Abbott said. “President Biden’s refusal to address the border crisis is not only enabling criminal actors like human traffickers and smugglers, but it is exposing innocent, unaccompanied children to illness and potentially unsafe living conditions.”

White House officials, however, have said the influx of migrants is not a “crisis,” which the administration reiterated on Monday.

Vice President @KamalaHarris laughs after she is asked if she has plans to visit the border.

While VP Harris laughs off a humanitarian crisis of epic proportions, Republicans are focused on securing the border and responding to the needs of our Border Patrol agents on the front lines. pic.twitter.com/5gdGBaGCXO pic.twitter.com/fs9HTw6lST