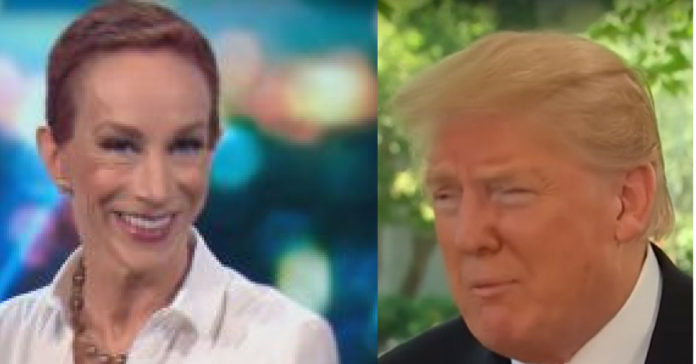 Kathy Griffin continues to disgrace herself every time she goes after President Trump. She is desperate and it shows.

Her mother, by the way, is a Trump supporter, most people don’t know that. But that has never stopped Kathy from launching attacks, most unfounded, at Trump and his team.

As usual, her attacks fall flat if not backfire. This time Trump did something unquestionably good and something she would have cheered Obama doing… and instead of cheering she attacked.

Comedian Kathy Griffin tweeted Tuesday, “If ICE is in the business of removing despicable Nazis can they please head over to the White House?” after President Trump ordered the deportation of Nazi collaborator Jakiw Palij.

Kathy Griffin tweeted this in response to White House press secretary Sarah Sanders’ tweet reading, “For many years a Nazi forced labor camp guard had been living in NY – a terrible injustice. Past Administrations failed to deport him. Today, @realDonaldTrump got the job done! ICE has removed this despicable Nazi from our great country.”

Palij, who is now 95-years-old, was arrested in his New York City home Monday and will be deported to Germany. Attorney General Jeff Sessions wrote in a Justice Department press release, “The United States will never be a safe haven for those who have participated in atrocities, war crimes, and human rights abuses.”

“Jakiw Palij lied about his Nazi past to immigrate to this country and then fraudulently become an American citizen.”

If ICE is in the business of removing despicable Nazis can they please head over to the White House? https://t.co/FDEFDoTPqw