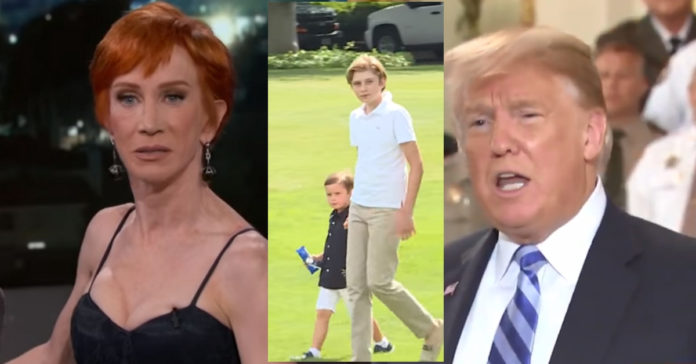 Kathy Griffin continues to tour half-empty venues and sparsely attended rallies to stay relevant in hopes her brand of humor can make a comeback.

It won’t — America has turned away from hate for hate’s sake and demands comedians actually tell funny jokes.

She can always go play Europe… and after what she said at another Trump protest she may have to go there sooner rather than later.

As reported by PJ Media: Griffin told the crowd at the Thursday night rally that she’s not “holding back” on criticizing Trump or “anybody” in the White House. Trump was in Montana for a rally while the White House protest was taking place.

“I love flipping the bird. Oh, that’s right, he’s not here because he’s a spineless prick. He is in Billings, Mont., running from us, running scared because I’m going to roast him,” Griffin said. “It’s not a threat. It’s a joke. It’s covered by the First Amendment.”

Someone in the crowd asked Griffin to apologize to Barron Trump for the photo shoot.

“I think Barron has seen worse than my photo,” she replied.

Griffin speculated that Kellyanne Conway wrote the anonymous op-ed about Trump published on Tuesday in the New York Times.

Griffin explained that she supports impeaching Trump, but she thinks he might resign first.

“I’m all about impeachment, although personally, because I know this asshole, I feel like he’s the type that’s going to resign but then come up with some bullshit excuse like, ‘oh, I’m going to start a new company or something.’ But I think he’s more likely to just go back in a hole like Saddam Hussein,” she said.

“Why are you calling for violence?” an attendee yelled.

“I’m calling for incarceration, sir. I just want to remind everybody that many, many people during Watergate ended up going to prison so, don’t worry, I really think the whole gang is going to prison. I really believe that,” she replied.

Griffin referenced the proposed border wall in her speech, saying it’s not going to be finished.

“Some babies were dropped on their heads but you, Donald, were clearly thrown at a wall. By the way, that wall is not going to be built. There’s not going to be a wall,” she said. “If he does, I am going to stand on top of it and just throw Mexican people back in – Selena Gomez or whoever is up.”