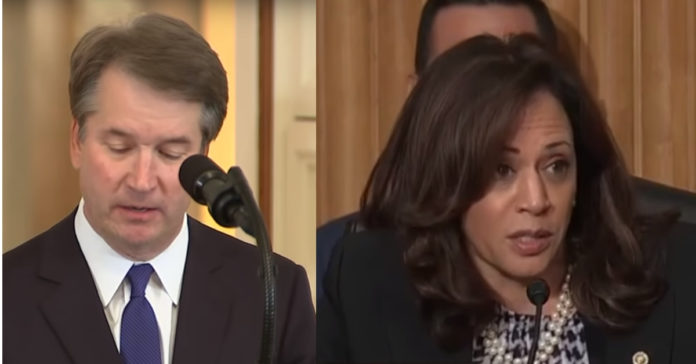 The left is desperate. Desperate to stop every single piece of Trump’s America first agenda.

And especially desperate to stop Supreme Court pick, Brett Kavanaugh. Which is fine in politics but we must draw the line at terrifying young children.

As reported by The Federalist: Supreme Court nominee Brett Kavanaugh’s daughters who were there to support their father, were rushed from today’s hearing after it got “hot:”

As Democratic senators fought to delay the hearing of Supreme Court nominee Brett Kavanaugh, and as spectators jarringly heckled the process Tuesday, his two young daughters were rushed from the hearing room, according to sources.

The two, Margaret and Liza, were taken out by their mother, Ashley, as the hearing got “hot,” said one insider.

“It was very unpleasant for young children,” said the insider. …and at times hecklers in the audience shouted out, apparently scaring the young girls there to support their father. One screamed, “This is a mockery. This is a travesty of justice. Cancel Brett Kavanaugh, adjourn the hearing.”

This comes after the hearings devolved into chaos thanks to Democrats less than 5 seconds after they began:

As GOP Sen. Chuck Grassley, who chairs the Senate Judiciary Committee, gave opening statements, Democrats urged the panel to adjourn and delay the hearing, in view of the release of 42,000 documents relating to Kavanaugh’s prior service in the executive branch on Monday night.

Democratic Sen. Dianne Feinstein of California, the ranking member of the committee, noted that Kavanaugh’s nomination was submitted as former aides and campaign advisors to President Donald Trump were indicted.

Senate Minority Whip Dick Durbin invoked the legacy of the failed nomination of Judge Merrick Garland, noting the GOP held his nomination in abeyance for nearly a year.

Senate Majority Whip John Cornyn of Texas argued that Democratic senators would be removed for contempt of court if the hearing were taking place in a judicial setting.

The Democratic interventions were repeatedly supported by loud shouts, applause, and cheering from progressive activists in the back of the hearing, many of whom were forcibly removed by Capitol Police.

“Kavanaugh is a danger to the future of America,” one demonstrator said, fearing Kavanaugh would provide the fifth vote to overturn Roe v. Wade.

Kavanaugh Reaches Limit, Sends Dem Senators Scurrying Back Under Rocks They Crawled From With Brutal Letter