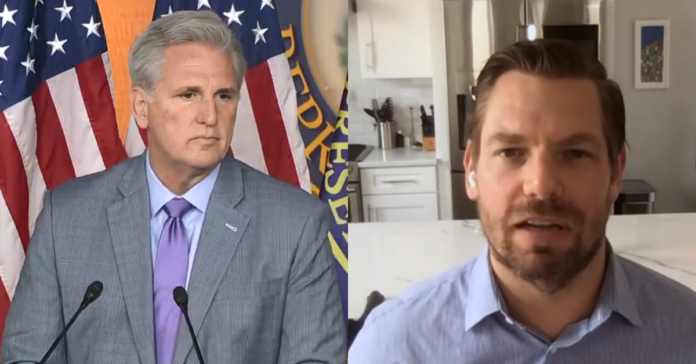 House Minority Leader Kevin McCarthy made his move to hold Eric Swalwell to account and just filed a resolution to kick him off the House Permanent Select Committee on Intelligence over past ties to a Chinese spy.

“Pelosi just reappointed Eric Swalwell to the Intelligence Committee. Based on the briefing she and I received together, Swalwell should not be on the panel in charge of guarding our nation’s secrets,” Kevin said last week when he announced the move. “Next week, I will offer a resolution to remove him from the Intel Committee.”

“Intelligence is the first line of defense in protecting our country against threats and foreign adversaries,” said Leader McCarthy. “Our civilian and military intelligence professionals do incredible work in gathering critical intelligence and deserve to have leaders on the Congressional intelligence committees who will match their level of dedication. I know that each of the members appointed today will be up to that task. Under Ranking Member Devin Nunes’ leadership, House Intelligence Committee Republicans will continue to play a pivotal role in staying ahead of the Chinese Communist Party threat, and will help keep the American people safe against ongoing and emerging threats.”

From serving in Ukraine as an FBI supervisory special agent to his deployment with U.S. Special Forces to Iraq, Rep. Brian Fitzpatrick continues to use his experiences to serve his constituents in Congress.

In addition to his work overseas, Brian also served as a Special Assistance U.S. Attorney who focused on drug crimes. His expansive resume includes serving as National Director for the FBI’s Campaign Finance and Election Crimes Enforcement and as a National Supervisor for the FBI’s Political Corruption Unit. Brian’s critical skills and unique experience will be a tremendous value-added to the House Intelligence Committee.

With decades of experience in the military, two Bronze Stars, the Combat Action Badge, and countless other federal and state awards, Rep. Trent Kelly is a patriot who has served his country with distinction and pride.

He has spent 35 years in the Mississippi Army National Guard, which included a deployment to Iraq where he commanded nearly 700 troops. Trent also has a masters degree in Strategic Studies from the United States Army War College.

In addition to his military service, Trent is an attorney who formerly ran his own private practice and he has also served as a District Attorney for the 1st Circuit Judicial District. As a member of the Permanent Select Committee on Intelligence, Trent will draw on his wealth of experience and knowledge to assist the committee in keeping Americans safe.

Before coming to Congress, Rep. Darin LaHood worked as a state and federal prosecutor, as well as an assistant U.S. attorney where he was recognized by both the DOJ and FBI for his outstanding work in fighting terrorism as the Chief Terrorism Prosecutor.

And since coming to Congress, he’s been an integral part of countering Chinese aggression on House Republicans’ China Task Force. Darin will be able to utilize his expertise on terrorism and finance to help advance the work of the House Intelligence Committee.

Throughout his congressional career, Rep. Markwayne Mullin has repeatedly shown that America’s national security is his top priority. During his work on the Innovation Caucus, Markwayne used his expertise to highlight our strategic advantage over China.

He has also worked to help promote democracy around the world through his work on the House Democracy Partnership. From owning his own small business to his time as an MMA fighter, Markwayne has demonstrated incredible work ethic and will undoubtedly bring that same passion to this new role.

Pelosi just reappointed Eric Swalwell to the Intelligence Committee. Based on the briefing she and I received together, Swalwell should not be on the panel in charge of guarding our nation's secrets.

Next week, I will offer a resolution to remove him from the Intel Committee.