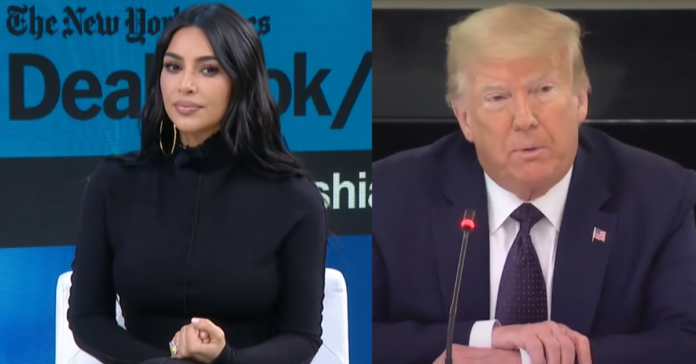 Kim Kardashian West overruled the Hollywood PC police and followed her heart and mind to make a real difference in the world.

She worked with the Trump administration despite furious backlash from the left and the hotshots in Hollywood.

She revealed for the first time she was warned not to work with Trump and her reputation would be done if she dared step foot in the White House.

David Letterman tried to get her to bash Trump and grew uncomfortable when she wouldn’t but she turned the tables and refused and then dropped the hammer and dished on Hollywood instead.

“Trust me, everyone called me and said, ‘Don’t you dare step foot in that White House or your reputation is done.’”

“And I said, ‘I have to step foot in there or these people’s lives don’t have a chance,’” she added.

Clearly uncomfortable with the notion of aiding Trump’s image, Letterman then asks, “But do you feel that what is being done on behalf of sentencing reform now via this current administration in any way allows the balance of democracy back in a corridor of viability?”

It’s a terribly worded, nonsensical question that elicits the only logical response from his guest, who replies, “Well, I have no idea what you just said.”

After the laughter and applause dies down, Letterman tries another tack. “I’m grateful for what you’re doing, but it doesn’t make me feel any better about the current administration,” he says.

But as she has done repeatedly over the past couple of years, Kardashian refuses to say one bad word about the man in the White House, only telling him, “I understand that.”

She will not even tell Letterman who she’s voting for in the presidential election, sitting in silence as he presses her with, “I know who I’m voting for.”

Though the interview was taped before Joe Biden had locked up the Democratic nomination and before Kanye West officially threw his MAGA hat in the ring, the obvious implication is whoever has the best chance of beating Trump.

“Trust me, everyone called me and said, ‘Don’t you dare step foot in that White House or your reputation is done,’” Kardashian says, arguing that it was a small price to pay for saving the lives of people who would otherwise die in prison.

“But see, your good work is overwhelming,” Letterman admits. “It’s a positive force that diminishes what I consider to be unacceptable behavior by the president.”

Instead of agreeing that any such “unacceptable behavior” exists, Kardashian only says she is “extremely grateful” for the administration’s work on criminal justice reform and will “stay focused” on what she can accomplish.

Kim Kardashian: I was warned working with Trump would ruin my rep https://t.co/8tUSLg6dT2 pic.twitter.com/85FMD779ZM