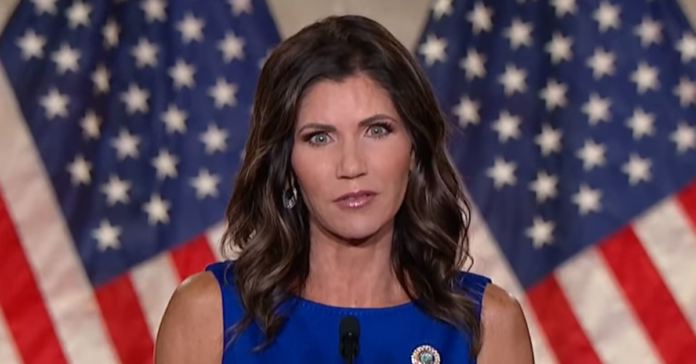 South Dakota Governor Kristi Noem just made a big move that is probably the easiest political layup in American history and announced she will sign a bill that just passed the legislature to ban males from competing in women’s sports.

The bill passed in the South Dakota Senate by a 20-15 vote yesterday. The ACLU of South Dakota said the bill violates the United States Constitution and federal civil rights laws.

“In an attempt to ‘level the playing field,’ House Bill 1217 excludes an entire group of women and girls from meaningful participation in sports,” said Jett Jonelis, ACLU of South Dakota advocacy manager.

“House Bill 1217 isn’t about protecting fairness in women’s sports. It’s about erasing and excluding trans people from participation in all aspects of public life. It’s about creating solutions to problems that don’t exist and, in the process, harming some of the most vulnerable people in our state.”

“We anticipate that when Governor Noem signs the bill, South Dakota will be the first state this year to pass legislation of this sort,” a spokesman for Noem told Fox News.

There’s no authoritative count of how many trans athletes have competed recently in high school or college sports. Neither the NCAA nor most state high school athletic associations collect that data; in the states that do collect it, the numbers are minimal: No more than five students currently in Kansas, nine in Ohio over five years.

Transgender adults make up a small portion of the U.S. population, about 1.3 million as of 2016, according to the Williams Institute, a think tank at the UCLA School of Law that specializes in research on LGBTQ issues.

The two dozen bills making their way through state legislatures this year could be devastating for transgender teens who usually get little attention as they compete.

In Utah, a 12-year-old transgender girl cried when she heard about the proposal, which would separate her from her friends. She’s far from the tallest girl on her club team and has worked hard to improve her times but is not a dominant swimmer in her age group, her coach said.

“Other than body parts, I’ve been a girl my whole life,” she said.

The girl and her family spoke with The Associated Press on the condition of anonymity to avoid outing her publicly.

Those who object to the growing visibility and rights for transgender people, though, argue new laws are needed to keep the playing field fair for cisgender girls.

“When the law does not recognize differences between men and women, we’ve seen that women lose,” said Christiana Holcomb, an attorney for the Alliance Defending Freedom, which filed the Connecticut lawsuit on behalf of four cisgender girls.

One of those girls, Chelsea Mitchell, defeated Terry Miller — the faster of the two trans sprinters — in their final two races in February 2020.

The ADF and others like it are the behind-the-scenes backers of the campaign, offering model legislation and a playbook to promote the bills, most of them with common features and even titles, like the Save Women’s Sports Act.

Thanks @benshapiro for highlighting South Dakota's respect for freedom and our work to protect the right to life of babies diagnosed with Down syndrome! https://t.co/oayVF6UH9y @realDailyWire