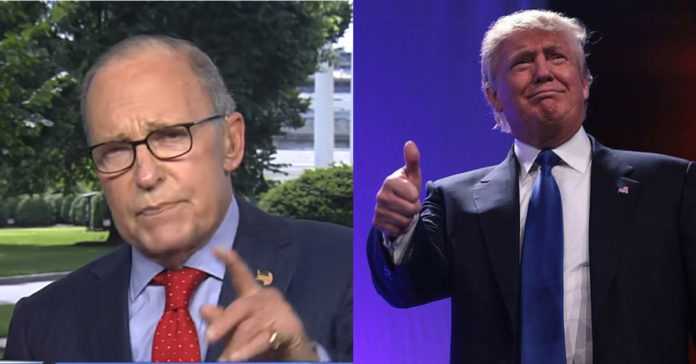 Larry Kudlow advised Ronald Reagan on the economy. So to say he has been around the block a few times is an understatement.

He is and has been one of leading economic minds in America.

When he speaks, the smart money on Wall Street listens. And what he just said about Trump’s roaring economy just may put Trump on Mount Rushmore.

“I believe we’ve entered into the longest largest prosperity in a couple of decades. I know it’s early in the game…This is a prosperity era. It’s a strong economy. What you’ve got here is continued job growth, low unemployment, and participation rates pretty good,”

The economic factor of capital expenditures, commonly called “capex” has experienced a resurgence under Trump, said Kudlow, who worked as Reagan’s budget deputy between 1981 and 1985.

“Here in the spring of 2018 most of these numbers for capex are showing six, seven, sometimes eight percent gains,” he said.

Such robust economic growth will also lead to higher pay for workers, he predicted.

“If you’re going to invest equipment, technology, buildings, whatever, the demand for labor goes up and their wages go up,” said Kudlow.

“I don’t think we’re anywhere near the end we’re at the beginning this could going on for a bunch more years, in my judgment.”

Contrary to what Nancy “Crumbs” Pelosi will have you believe, the economy is humming along with explosive growth not seen since Reagan on the horizon.

The tax cuts and the brilliant foreign policy has created an opportunity for a rebirth the likes of which America has never seen.

Trump will get the credit because he had the courage (and had to fight everyone to do it) to change course and put America first.

Quite simply we spent the last 40 years helping other countries get out of poverty and enter the modern world.

We are by far the most generous people who ever walked the earth. We created stability and shared technology and lifted billions out of poverty.

We get no thanks for it and it while it may have been dumb militarily to help develop China, it’s done and there is no use crying over it.

You can argue whether it was a smart strategy or not, but you cannot argue with the fact that the President who rebuilds America, who puts America first, will go down with the all-time greats.