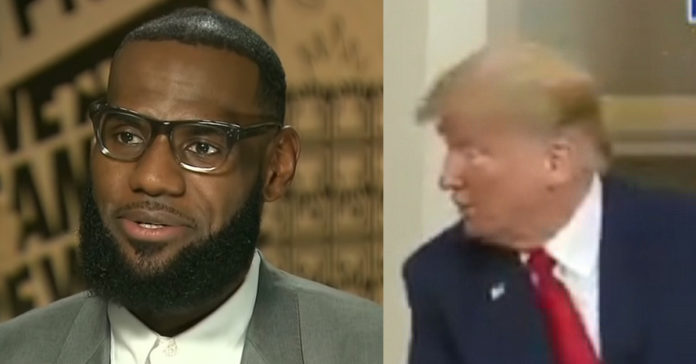 What the left will never understand is that there are legitimate areas to launch attacks on President Trump.

There are legitimate policy debates that can and should be going on – if the left ever gets any power again that is – in DC.

But the left, far from being up to the challenge, can’t even pick the right battles to fight. It is endemic in the DNC and it will doom them politically for years to come.

As LeBron James made clear with another ridiculous attack on Trump.

The NBA superstar opened up on Monday about how he believes that racial tension has become an even more prominent issue of late because of Trump and his actions.

James spoke at lengths about the President, race and politics in a wide-ranging interview with CNN’s Don Lemon, which aired just hours after opening his new I Promise School in Akron, Ohio.

The 33-year-old was talking about how both athletics and education were high priorities for the young students at his new school when he mentioned the current climate in the US.

‘When you’re part of sports, it brings so much comradery and so much fun. We are in a position right now, in America more importantly, where this whole race thing has taken over,’ he said.

One, because I believe our president is trying to divide us… he is, he’s dividing us and what I have noticed over the last few months is that he’s kind of used sport to divide.

‘That’s something that I can’t relate to because I know that sport was the first time I was around someone who was white.’

James went on to say that sport gave him the opportunity to interact with people from different races and backgrounds when he was young. He joked about learning what a pantry was and how a white family he was close with ate dinner at 6.30pm – a time he considered as a youngster to be the afternoon.

He said Trump is creating a wedge by using situations like NFL player Colin Kaepernick kneeling during the anthem and ‘uninviting’ NBA star Steph Curry to the White House.

This is so ridiculous on so many levels it is hard to even respond to but suffice it to say America has always been a divided nation – even back to Jefferson and Hamilton and their competing visions.

What we have always done, LeBron is come together, usually around our shared patriotism to find common cause.

It is not Trump’s fault the left would rather protest than rally around the flag.