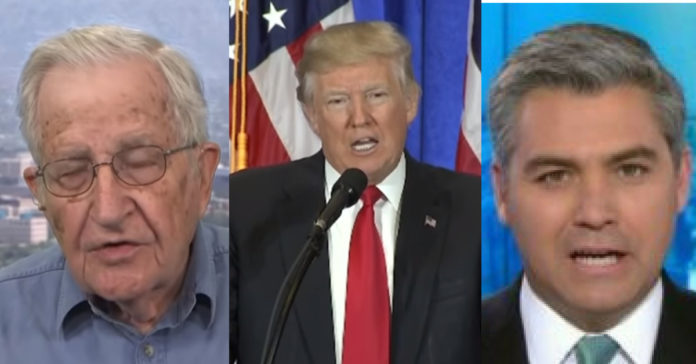 The main problem with the left is their absurd hypocrisy. Pick a topic, any topic and you will be shocked to see how hypocritical the left can be.

How they so often flip-flop on positions when it suits the narrative they want to push.

Take the whole Russia witch hunt, for example, it has been relentlessly pushed by the media via the sin of omission.

They can’t bring down Trump with the truth they so they carefully craft a narrative they deem truthful.

It is just a big scam and one a legendary liberal has had enough of it and decided to call them on it.

As reported by Real Clear Politics:

The political dissident, linguist, and professor Noam Chomsky says the rest of the world thinks the U.S. media’s Trump-Russia collusion allegation is a “joke” given the history of the U.S. in the last 135 years, and that if we are worried about foreign interference, Israel already influences more of American politics than Russia could ever hope to, in this interview with Democracy Now!

“Take, say, the huge issue of interference in our pristine elections. Did the Russians interfere in our elections? An issue of overwhelming concern in the media. I mean, in most of the world, that’s almost a joke.”

“First of all, if you’re interested in foreign interference in our elections, whatever the Russians may have done barely counts or weighs in the balance as compared with what another state does, openly, brazenly and with enormous support,” he said.

“Israeli intervention in U.S. elections vastly overwhelms anything the Russians may have done,” Chomsky said. “I mean, even to the point where the prime minister of Israel, Netanyahu, goes directly to Congress, without even informing the president, and speaks to Congress, with overwhelming applause, to try to undermine the president’s policies—what happened with Obama and Netanyahu in 2015. Did Putin come to give an address to the joint sessions of Congress trying to—calling on them to reverse U.S. policy, without even informing the president?”

“And that’s just a tiny bit of this overwhelming influence.”