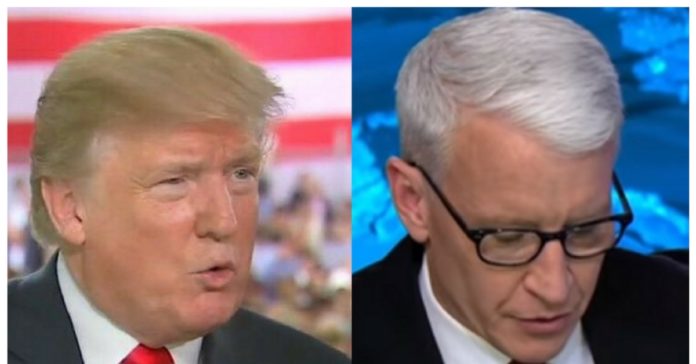 The liberal media and the Democrats who use them to frame anti-Trump narratives just got a massive egg sandwich on their faces.

A foreign country spying on America? How is that news?

A foreign country trying to influence our politics? Washington is awash in foreign money seeking to lobby our government?

Look, no one likes all the money in politics that citizen united allowed, Trump basically ran against that bad court decision when he promised to drain the swamp, so it is a bit much now to try to impeach him on something everyone is doing.

But the media went crazy demanding Trump cancel his meeting with Putin or demand extradition from the hackers.

President Trump is keeping expectations in check in advance of his meeting with Russian President Vladimir Putin, according to an interview with “CBS Evening News” anchor Jeff Glor. “I go in with low expectations,” Mr. Trump said. “I’m not going with high expectations.”

Glor interviewed Mr. Trump one day after Deputy Attorney General Rod Rosenstein announced the indictment of 12 Russians for their alleged attempts to interfere in the 2016 presidential election, and just before Mr. Trump’s much-anticipated meeting with Putin on Monday in Helsinki, Finland.

Asked about his goals for the meeting, Mr. Trump said only, “I’ll let you know after the meeting,” promising “nothing bad” is going to come out of the world leaders’ discussion.

Mr. Trump, who was briefed on the indictment of the 12 Russians before Rosenstein’s announcement Friday, said he “hadn’t thought” about asking Putin to extradite them to the U.S. — the U.S. has no extradition treaty with Russia. Mr. Trump continued to blame the Obama administration for its response to Russia’s attempts to interfere in the 2016 election, as he did in tweets on Saturday.

Mr. Trump also insisted the Republican National Committee had superior cybersecurity systems to the DNC’s, and that is why the DNC was hacked. “And I heard that they were trying, or people were trying, to hack into the RNC too,” the president continued. “The Republican National Committee. But we had much better defenses. I’ve been told that by a number of people. We had much better defenses, so they couldn’t. I think the DNC should be ashamed of themselves for allowing themselves to be hacked. They had bad defenses and they were able to be hacked. But I heard they were trying to hack the Republicans too. But — and this may be wrong — but they had much stronger defenses.”