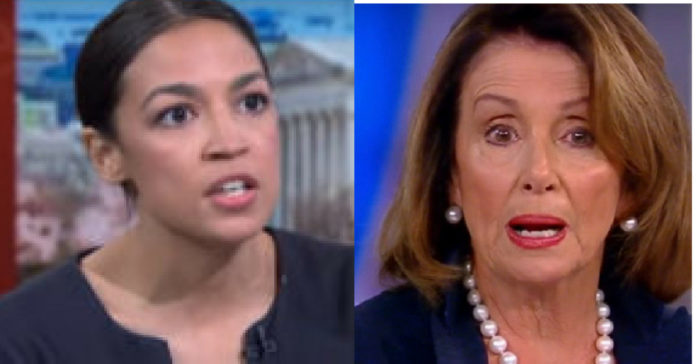 Democratic congressional candidate and admitted socialist Alexandria Ocasio-Cortez is at it again.

Look, as long she keeps talking the GOP will keep winning. Sure, she may dupe the liberals in her district, such is their dependence on the state to survive, but that stuff doesn’t play in middle America.

And any Democrat, especially Nancy Pelosi, knows that saying Israel is occupying Palestine is a death sentence in American politics.

Democratic congressional candidate Alexandria Ocasio-Cortez caused controversy in a recent interview when she said America wasn’t founded on capitalism and called Israel an “occupation” force over the Palestinian territories.

The political newcomer — appearing on PBS’s “Firing Line” on Friday — was simply asked, “What is your position on Israel?”

Ocasio-Cortez responded in non-controversial fashion, calling for a two-state solution and Israel’s absolute right to exist.

When pressed to elaborate, Ocasio-Cortez, a Democratic socialist, said: “I also think that what people are starting to see, at least, in the occupation of Palestine is just an increasing crisis of humanitarian condition.”

“Oh I think — what I meant is like the settlements that are increasing in some of these areas and places where Palestinians are experiencing difficulty in access to their housing and homes,” said Ocasio-Cortez.

She chuckled and tried to laugh off her blunder.

“I am not the expert on geopolitics on this issue,” she said. “I just look at things through a human rights lens and I may not use the right words … Middle Eastern politics is not exactly at my kitchen table every night.”

The Simon Wiesenthal Center blasted her in a tweet, saying she “knows zero about 3,500 yr relationship of Jewish people to Land of Israel.”

The American people always stand with Israel, always and further, the Israel lobby is a mega-donor to both political parties.

In short, Pelosi has a major problem on her hands heading into the important 2018 midterms.