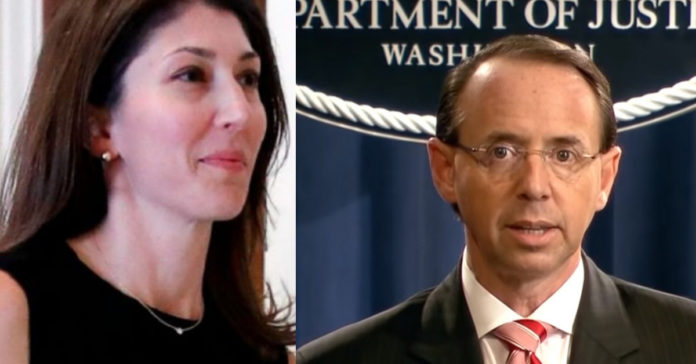 The deep state is turning on each other and it will be a bloodbath before it is all said and done.

Andrew McCabe and Lisa Page are clearly behind the leaks that have ruined Rod Rosenstein and if not them, then they have corroborated them as true which is worse.

Look, the deep state is on the run and if Mueller could have saved them he would have.

As reported by The Washington Examiner: Former FBI lawyer Lisa Page was reportedly under the impression that Deputy Attorney General Rod Rosenstein was being serious when, in the days after FBI Director James Comey was fired last spring, he brought up secretly recording President Trump.

The New York Times broke the news about Rosenstein’s idea on Friday, characterizing the taping comments as well as talk of invoking the 25th Amendment to the Constitution to oust the president as being legitimate considerations. However, sources in follow-up reports from the Washington Post and NBC News pushed back, saying the covert recording remark was made sarcastically or jokingly.

But one notable person in the room, Page, thought otherwise. Two sources familiar with the situation said Page, who wrote a memo about that meeting, told the Daily Beast she took the secret taping comment seriously.

Page resigned from the FBI in May amid a controversy that derived from text messages between herself and FBI agent Peter Strzok that displayed an anti-Trump bias.

Rosenstein vehemently denies that he ever “pursued or authorized” the recording of the president, and another one of Daily Beast’s sources, a former official who was in the room when Rosenstein suggested a secret recording, also dismissed the idea. “Never for one second did I think he was seriously suggesting that anybody do that,” that source said.