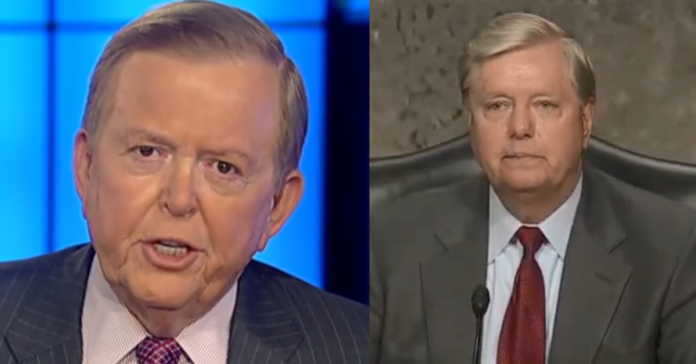 Fox Business host Lou Dobbs ripped Senator Lindsey Graham Friday for betraying President Trump before asking why anyone in South Carolina would vote for him.

Graham is in a tight race against Jaime Harrison. Harrison has raised more money than almost anyone in history for a Senate race because the left hates Lindsey with a passion not seen since they went after Trump.

Dobbs blasted Graham Friday for not going after people in the Obama administration who tried to take Trump out and for “not subpoenaing the left-wing heads of the censorships Twitter and Facebook until after the election.”

“I don’t know why anyone in the great state of South Carolina would ever vote for Lindsey graham. It’s just outrageous,” said Dobbs.

“This is the guy who keeps saying, ‘Stay tuned.’ He said he would get to the bottom of Obamagate with the judiciary committee, which has been a year end a half, actually longer, of absolute inert response to these pressing issues of our day.”

“He has betrayed the American people and his oath of office.

“He’s done absolutely nothing to investigate Obamagate except to tell everyone stay tuned, time and time again.

Look, no one really expects Lindsey to lose in South Carolina so let the left waste their money there but one thing you have to remember before bashing Lindsey for not doing what Dobbs wants – people don’t like weak politicians who don’t stick to their guns.

If Lindsey did start some investigations just for publicity he may lose voters who want to vote for an independent voice for their state and not just a blanket vote for whatever party they are in.

It is a tightrope all politicians must walk in our federal system and Dobbs taking things out of context when Graham has done more to help Trump than any other Senator is not helpful.