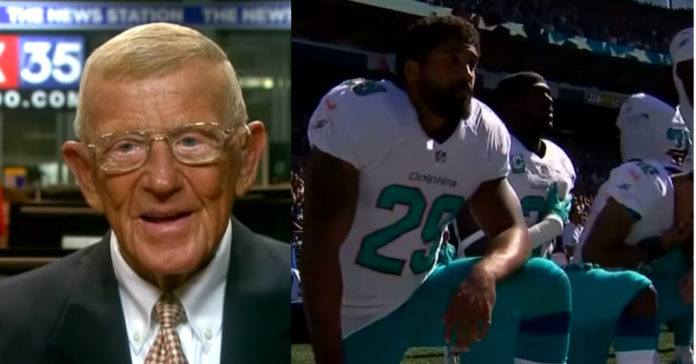 Lou Holtz is old school, like Mike Ditka and Bobby Knight. It’s possible that times have changed forever and we are in a new era of American “softness” but not if Lou can help it.

In fact, Lou just came up with an easy way to make all professional athletes respect the national anthem.

It is so simple it just may work.

Legendary former Notre Dame football coach Lou Holtz said Saturday it should be matter of choice whether National Football League players stand or kneel during the playing of the National Anthem: If they choose to kneel, then they’ll choose not to play.

“I would say that it’s your choice,” Holtz told Fox News’ “Fox and Friends Saturday,” when he was asked what action he’d take if he was the NFL’s commissioner.  “Do you choose to kneel for the National Anthem, you are choosing not to play. It’s that simple. That’s your choice.”

Holtz said he appreciates the choices and sacrifices athletes make, but at the same time, he’s not surprised the NFL put its new policy on kneeling on hold this week.

In May, the NFL passed a rule forbidding players from sitting or taking a knee if they are on the field or sidelines when the anthem is performed, but allowed them to stay in the locker room if they wish. The policy said teams would be fined if players didn’t stand during the anthem while on the field. The league left it up to teams on how to punish players.

“Everything the NFL does on this is a reaction,” said Holtz. “The players, I think, are very, very emotionally involved. One of the main problems we have, I think is, social media. People get on Twitter and Facebook and say hey, you need to kneel for the National Anthem.”

Holtz said he’s been involved in many football games over the years and none of them did not have the National Anthem played before the game, as it’s part of the sport.

“Let’s remember, years ago these athletes made $50,000 a year,” said Holtz. “Now they make multimillions because the NFL became very popular. It surpassed Major League Baseball as the number one sport.”