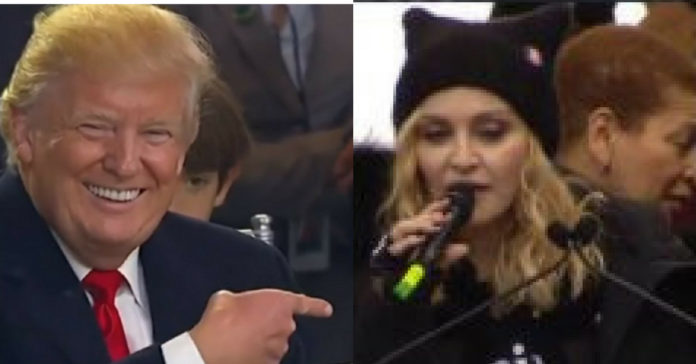 Madonna finally comes clean and all we can say is at least she is consistent. And that America is better off that she left.

Pop star Madonna says she moved her family to Portugal partly due to Donald Trump being elected president of the United States.

In an interview with Vogue Italia released Wednesday, Madonna said she “needed a change,” after the 2016 election. “I wanted to get out of America for a minute—as you know, this is not America’s finest hour,” the aging singer said and also cited her son David’s ambitions to play professional soccer as motivation to flee the United States.

“My son David, who is going to be 13 on September 24th, has wanted to play soccer professionally for years. I’ve been desperate to get him into the best academies with the best coaches, but the level of football in America is much lower than the rest of the world,” Madonna told the Italian fashion magazine.

The “Like a Virgin” songstress, an outspoken critic of President Trump, previously confessed to fantasizing about  “blowing up the White House,” and purports to not have had a good night’s sleep since the 2016 election.

U.S. Secret Service reportedly opened an investigation into the singer after telling protesters at the Women’s March in Washington, D.C. about having thoughts of blowing up the White House.

“It felt like a ­combination of the heartbreak and betrayal you feel when someone you love more than anything leaves you, and also a death,” she told Billboard. “I feel that way every morning; I wake up and say, ‘Oh, wait, Donald Trump is still the president,’ and it wasn’t a bad dream that I had.”