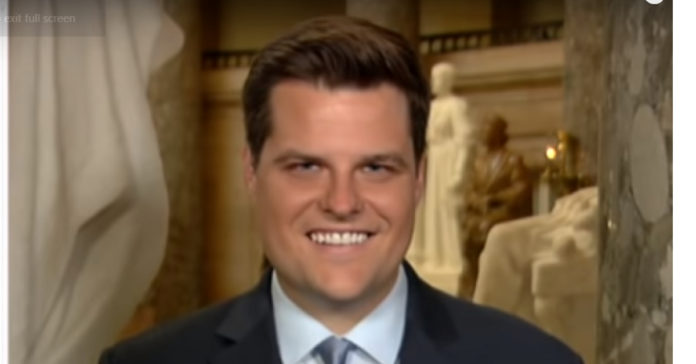 Matt Gaetz has had enough of the deep state shenanigans. Look, it is time for the American public to learn the truth.

We can handle it – everyone should just lay their cards on the table, under oath, and tell us what they did and why and what they know.

All this hiding and sneaking around is doing damage to the credibility of our institutions.

Gaetz said that if Rosenstein does not appear, he and House Freedom Caucus Chair Mark Meadows of North Carolina will prepare articles of impeachment against him.

Gaetz said that any lawmaker may put forward articles of impeachment, and that they — by rule — must be brought up for a vote within two business days.

“No matter what the president does [to Rosenstein], the Congress has an obligation to exercise our oversight role,” Gaetz said on “The Story.” “Rod Rosenstein needs to be in the witness chair.”

A New York Times report last week said an incensed Rosenstein made the reference in a private 2017 meeting with officials — one of whom was Andy McCabe, the acting FBI director at the time.

Some have said Rosenstein was “joking” when he allegedly spoke about wearing a wire or pressing cabinet members to invoke the 25th Amendment and remove President Donald Trump from office.

“[If] he was sarcastically joking, that is [still] an inappropriate thing to do when you have subordinates… in your presence,” Gaetz said.

Gaetz said Rosenstein has additionally been “very evasive” when it comes to the demands of the Judiciary Committee on which the lawmaker sits.

“We ought to know what happened, under oath, so it’s not just speculation,” he said.