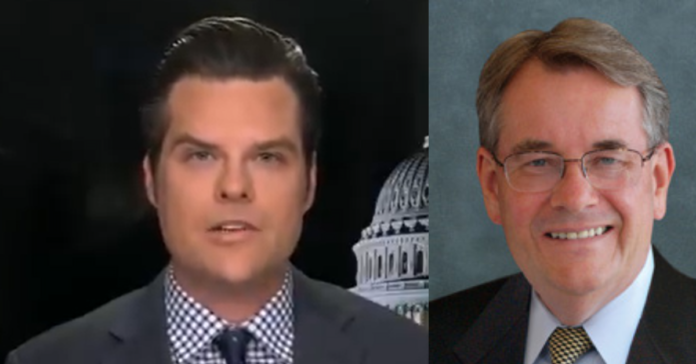 Rep. Matt Gaetz’s father Don Gaetz broke his silence in a new interview while Matt showed reporters an email exchange with the FBI to back up his claims that his father wore a wire for the FBI.

Don Gaetz is a former Florida Senate president. He got rich selling a health care company years ago. He said he is working with the FBI. He claimed that he asked his attorney, Jeffrey Neiman, to deal with the assistant U.S. Attorney for the Northern District of Florida, David Goldberg.

He told Neiman to make sure there was evidence that he was indeed working for the feds. Today Matt gave some of those emails to a reporting team at Politico.

“The FBI asked me to try and get that information for Matt and an indication we would transfer money to Mr. David McGee,” Don Gaetz said.

“I said to the FBI ‘I’m willing to wear a wire and be cooperative,’ but I was asked to say things that are not true to draw out an admission,” Don Gaetz said.

“I wanted there to be an understanding committed in writing that I’m working for the FBI and at their request, not operating on my own,” he added.

Matt gave the March 25 emails between Neiman and Goldberg to Politico to confirm.

“I can confirm that your client is working with my office as well as the FBI at the government’s request in order to determine if a federal crime has been committed,” read an email between the two lawyers. “This has been discussed with, and approved by, the FBI as well as leadership in my office and components of main justice.”

“The government thanks you for working cooperatively with the FBI,” the email read according to the report.

Don Gaetz said in the interview he wore a wire during a meeting earlier this month with McGee and said he was set to meet Wednesday with Stephen Alford, a local developer who he said is also part of the alleged extortion scheme.

During that meeting, Don Gaetz said, he was again set to wear a wire and try to get Alford to talk about payments he allegedly was to make to McGee, but the meeting fell apart when news broke that his son was being investigated by the Justice Department. Alford did not respond to text messages seeking comment.

In separate interviews, Don and Matt Gaetz (R-Fla.) acknowledged a Justice Department probe involving the younger Gaetz, 38, into whether he had improper involvement with a 17-year-old girl. The Gaetzes say they are the target of an extortion plot seeking money to keep the DOJ investigation quiet.