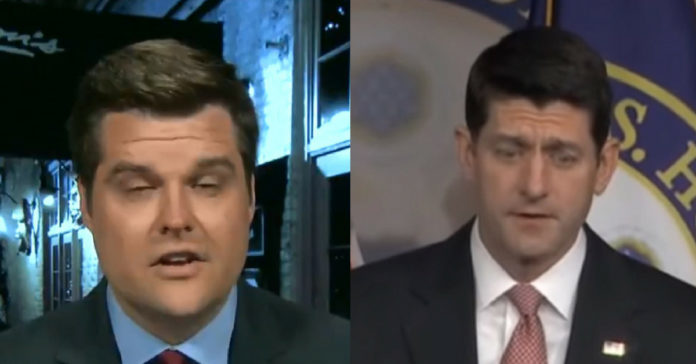 Matt Gaetz has been a strong and oftentimes lonely voice for justice in the swamp of Washington D.C.

He has been tireless, right there with Devin Nunes, in simply wanting to get to the truth.

Why does the pursuit of the truth enrage the media and the left? You would think Matt would be applauded for his quest for justice, not mocked for it.

One person who learned that the hard way is Paul Ryan.

“You know I run in if more conservative circles of the House and I have never into this point heard a single person talk about removing Speaker Ryan from the speakership,” the Florida Republican told Fox Business’ Lou Dobbs. “Today for the first time I was hearing colleagues say if speaker Ryan won’t stand with us in this fight over the essentials of our democracy, not weaponizing intelligence community against the presidential campaign, do we need to look at other choices?”

He said the notion of a conservative revolt “remains a lingering question and you’re starting to see more frustrations bubble to the top because we need that leadership.”

Both Gaetz and Dobbs condemned Ryan, with Gaetz saying “there is no defense today for Paul Ryan siding with the FBI and Department of Justice against those of us in the Congress who are working for transparency and accountability” and Dobbs dubbing the Wisconsin Republican a “disaster.“

Lou Dobbs: What Richard Burr Just Did Is Beginning Of End Of Bob Mueller’s Witch Hunt