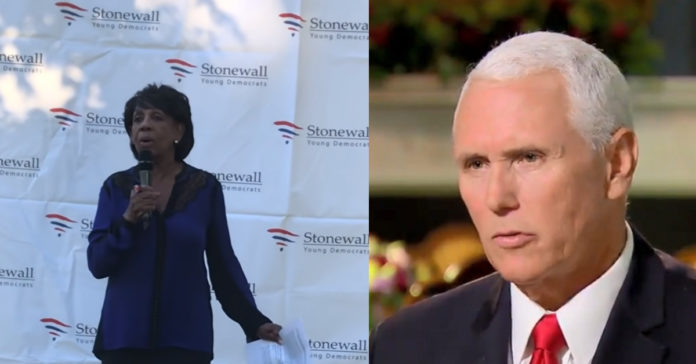 Maxine Waters is like a broken record who just learned a new tune. By now everyone knows she wants to impeach President Trump for something she has not articulated yet, and now she wants to go one better.

So arrogant is Maxine that she not only thinks Trump will be impeached (not sure how without the votes in the Senate) but she thinks she can impeach Mike Pence too.

The left is simply not living in reality. As reported by NTK:

Rep. Maxine Waters (D-CA), who was one the first Members of Congress to call for President Trump to be impeached, said that after Democrats impeach Trump, they will then impeach Vice President Mike Pence, while speaking at an event in California over the weekend.

“I had a conversation here today when someone asked, ‘What about Pence? If you’re able to impeach [Trump], Pence will be worse.’ And I said, ‘Look, one at a time,’” Waters said while speaking at an event hosted by the Stonewall Young Democratic Club.

“You knock one down, and then well be ready for Pence. We’ll get him, too,” Waters said.

If Trump and Pence were both to be impeached by a Democrat-controlled Congress following the 2018 midterm elections as Waters suggested, then the Speaker of the House of Representatives would become president.