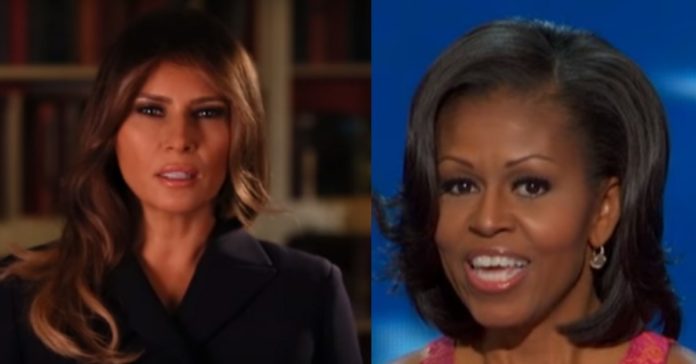 The media has not been kind to Melania Trump. Now, her husband President Trump can handle it, like Barack could handle it.

But First Lady’s didn’t ask for the spotlight and are often targets when the media cannot take down their husbands.

So you just know Michelle Obama is nodding in agreement with Melania’s brilliant way to get even with the liberal media.

She is charging them to use old pictures of her from when she was just a celebrity. Smart!

First lady Melania Trump reportedly earned between $100,000 and $1 million in royalties from Getty Images in 2017 for the use of photos that under a licensing agreement could only be used in “positive coverage,” according to a report by NBC News.

At least 12 news organizations last year used some of the photos, including Yahoo News, the Daily Mail, Fox News, Condé Nast and the Houston Chronicle.

NBC News was among the news organizations that used the photos. A spokesperson told NBC that it did not agree or sign a statement that the image would be used for positive coverage and that it did not know of the royalties going to the first lady.

One of the Mahaux photos also appeared in the 2017 calendar sold in the White House gift shop, according to NBC News, and another in the official guide book given to delegates at the 2016 Republican National Convention.

While it is not unusual for celebrities to sign deals governing the use of photos, it is unusual for the first lady to be party to such an agreement.

Getty Images told NBC News that additional details of the deal and payments to Melania Trump are confidential and declined to say if similar deals exist with other members of the Trump family.

The media is annoyed that this was going on but can you blame Melania? She had a deal in place before, when she was a celebrity and model so why not make a few bucks off the insatiable media.