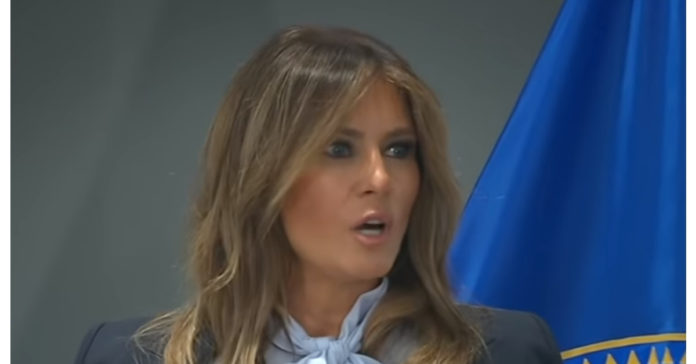 Melania Trump is not happy that she has a traitor in the White House and she is breaking her silence.

In a blistering statement, Melania hit back hard and left little doubt that this disloyal hack will soon be outed.

As reported by CNN:

First lady Melania Trump fired back at the anonymous source that stunned the White House with a New York Times op-ed Wednesday.

“Freedom of speech is an important pillar of our nation’s founding principles and a free press is important to our democracy. The press should be fair, unbiased and responsible,” she told CNN in a statement Thursday.

The first lady had a specific message for the author: “To the writer of the op-ed — you are not protecting this country, you are sabotaging it with your cowardly actions.”

The op-ed author was identified as a “senior Trump administration official” who says they are part of an internal “resistance” working to thwart parts of Trump’s agenda and block his worst impulses and was published amid questions of President Donald Trump’s fitness and his control over his administration.

The first lady’s reaction mirrors that of her husband, who on Wednesday called the author “gutless.”

“Unidentified sources have become the majority of the voices people hear about in today’s news. People with no names are writing our nation’s history. Words are important, and accusations can lead to severe consequences,” she added. “If a person is bold enough to accuse people of negative actions, they have a responsibility to publicly stand by their words and people have the right to be able to defend themselves.”