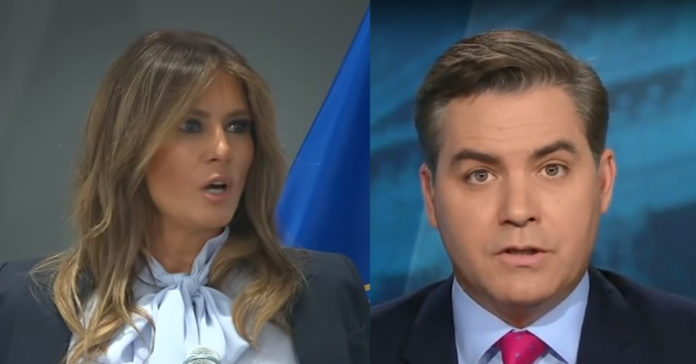 Melania Trump speaks softly but you better believe she carries a big stick. Behind the scenes accounts of Trump’s white house show her to have considerable influence.

She’s smart and strong but knows a few well-placed words can have a devastating effect.

As reported by The Washington Examiner First lady Melania Trump has apparently had enough.

In a fundraising memo to GOP supporters, the soft spoken Trump has ripped the media and Democrats for lying about her husband and his supporters.

“From the moment my husband, Donald, placed his hand on the bible and took the oath of office to serve as America’s President, he has worked nonstop to deliver on his promises.

Democrats and the opposition media are doing everything they possibly can to discredit Donald with false accusations by spreading their fake news and making it appear that he does not have the support of America’s voters.

That is why I am asking that you join my husband as he fights for our nation by signing your Presidential Pledge of Support.

Up until a few years ago, I never envisioned that I would one day serve our nation as First Lady.

Everything you and I believe in regarding the future of America is on the line in the coming months. This is a battle we must win together.

I’m asking you and other Americans across the country to personally register your support and help prove that the Democrats and media are wrong.

Please sign your Presidential Pledge of Support. I look forward to telling Donald that you are standing with him.