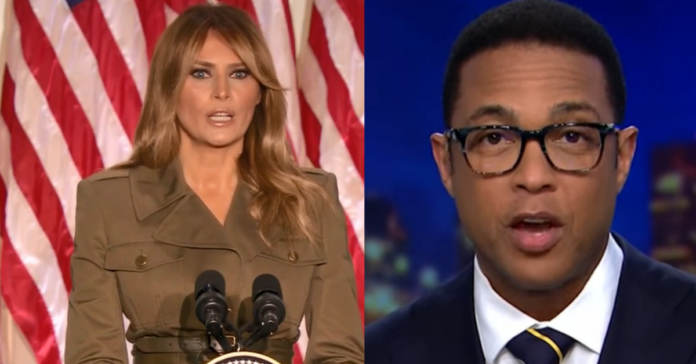 Melania Trump just broke her silence and ripped the media for ignoring her positive work and focusing on petty, salacious claims.

She wrote, “Over the last couple of weeks, I have had time to reflect on many things personal to me. One of the most honorable and important roles I have ever undertaken has been serving you, the American people, as the First Lady of this country.

When I thought about where I wanted to put my time and efforts, there was no hesitation. BE BEST has one simple purpose—to help children. It serves to provide the tools children need to prepare them for their futures.

We all know that more often than not, information that could be helpful to children is lost in the noise made by self-serving adults.”

She then discussed her former friend’s money grab in the form of a tell-all book.

“I have most recently found this to be the case as major news outlets eagerly covered salacious claims made by a former contractor who advised my office.

A person who said she “made me” even though she hardly knew me, and someone who clung to me after my husband won the Presidency. This is a woman who secretly recorded our phone calls, releasing portions from me that were out of context, then wrote a book of idle gossip trying to distort my character.

Her “memoir” included blaming me for her ailing health from an accident she had long ago, and for bad news coverage that she brought upon herself and others. Never once looking within at her own dishonest behavior and all in an attempt to be relevant. These kinds of people only care about their personal agenda—not about helping others.”

Next Melania turned to the media and put them on notice:

“Once again, outlets chose to focus their coverage on pettiness over my positive work. There are plenty of opportunists out there who only care about themselves, and unfortunately seek to self-aggrandize by knowingly taking advantage of my goodwill.

Anyone who is focused on tearing things down for their own gain, after knowing what I stand for, has lost sight of what we are here to accomplish and who we are here to serve. To push forward a personal agenda that attempts to defame my office and the efforts of my team, only takes away from our work to help children.

I would say to my team, our supporters, and to all those out there on the frontlines in our communities every day—remember what we are all about and what we are trying to accomplish together.

I would remind the media that they have the choice of focusing on our next generation. As a country, we cannot continue to get lost in the noise of negativity and encourage ambition by those who seek only to promote themselves.”

When the media chooses to focus on self-serving individuals & salacious gossip instead of work to help our next generation, it needs to be talked about: ⬇️ https://t.co/0VIv1DcG35